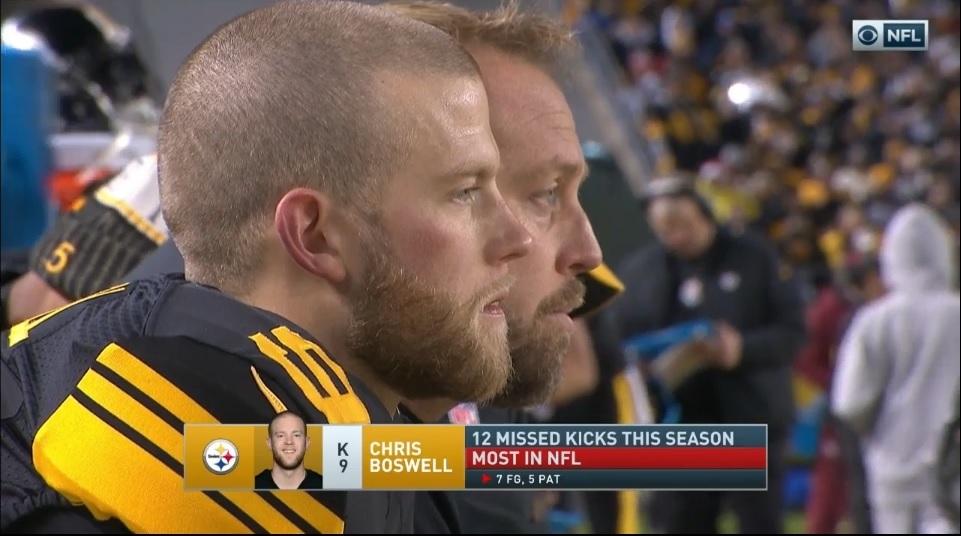 2018 was the no good, terrible, very bad year for Chris Boswell. Our Daniel Valente profiled just how poor it was, both in terms of production and value. You know it, I know it, he knows it. Not even I, actively petitioning Danny Smith adopt me as the son-he-never-wanted, can spin how ugly a year it was for Boz before getting shut down with his groin injury.

Is there any hope moving forward?

Kickers are like the TV weatherman. Unpredictable results. Sometimes it’s supposed to be sunny and you walk out into the pouring rain. Kickers can split the uprights from 53 yards out on one kick, shank another on the next. Pittsburgh found out the position’s volatility last season.

But in knowing that, there’s always the chance to rebound. Bad seasons don’t always continue forever, do they? That’s what I wanted to investigate. Even though history isn’t the world’s best predictor (again, we’re talking about an unpredictable position), how have kickers who sucked one year done the next? Do they figure it out? Or do they remain bad before the NFL spits them out?

For this study, I’m looking at all kickers from 2001 to 2017 with similar hold-your-nose seasons as the one Boz had last year. Requirements? Minimum 15 field goal attempts, sub 70% percentage, just as Boswell endured. There’s been 21 such seasons prior to 2018.

This table represents the ones who attempted at least 15 kicks the next year, too, since odds are Boswell will be the Steelers’ guy in 2019. It’ll show their field goal percentage from that year and what they did the following season.

On average, these 17 kickers saw their field goal percentage increase by 15.6% their following season. 13 of the 17 increased by at least 10%. Five went up by more than 20%. As a group, they converted 79.4% of their field goals that next year.

Only two, Kris Brown in ’01 and Martin Gramatica in ’03, regressed or had an increase of less than 5%.

So if we take that average and apply it to Boswell, he’d finish 2019 at 80%. That means going 16/20 instead of 13/20 like he did last season. That’s not great and a percentage that still ranks near the bottom of the league but wouldn’t be nearly the cause for concern.

Looking beyond just that next year, there’s plenty of success stories in this group. Neil Rackers turned that slow start to his career into a solid one, kicking for 12 seasons and twice leading the league in field goal percentage. Ryan Longwell was an 85% kicker the remainder of his career; Rian Lindell checked in at 82%. Janikowski enjoyed n 18 year campaign while Zuerlein is now known as one of the league’s best kickers, averaging 90% since that terrible 2015 season.

Again, just want to be clear, this is no guarantee of success. Some of the names on that list of 21 flamed out. No one remembers Dave Rayner (and if so, nice to meet you Mrs. Rayner). But this study shows it’s reasonable to assume Boswell will have a better year and still reclaim the great career he was building prior to what happened in 2018.

For his and the Steelers sake, it’s gotta happen.