Shot #1 – Steelers running back James Conner is celebrating his 23rd birthday on this Sunday and in honor of that, below is a video from steelers.com that includes his top plays from the 2018 season.

Shot #2 – Steelers rookie running back Benny Snell Jr., the team’s fourth-round draft pick last weekend, will more than likely be part of the team’s rushing attack at some point during the 2019 season. Below are a few interesting stats from Bell’s college career at Kentucky that Pro Football Focus has compiled and posted on Twitter for the last several months.

Snell was a true workhorse for Kentucky last season, finishing in the top ten at the position in missed tackles forced, yards after contact and runs of 10 or more yards! pic.twitter.com/XOGZ8knJAn

One of the best running backs this season, Benny Snell Jr. will look to make his mark in the NFL. pic.twitter.com/DcEgpo0xm5

Benny Snell was tremendous in 2018 pic.twitter.com/eAGOhsHbtl

Shot #3 – While meaningless overall, draft grades from the ‘experts’ have been all over the internet this past week and René Bugner has managed to compile several of them in one clean graphic and has now posted them on his Twitter account at @RNBWCV. Below is the graphic and as you can see, the 18 draft evaluations he compiled have the Steelers with a GPA of 3.02. good for 13th-best. (click on image below to enlarge) 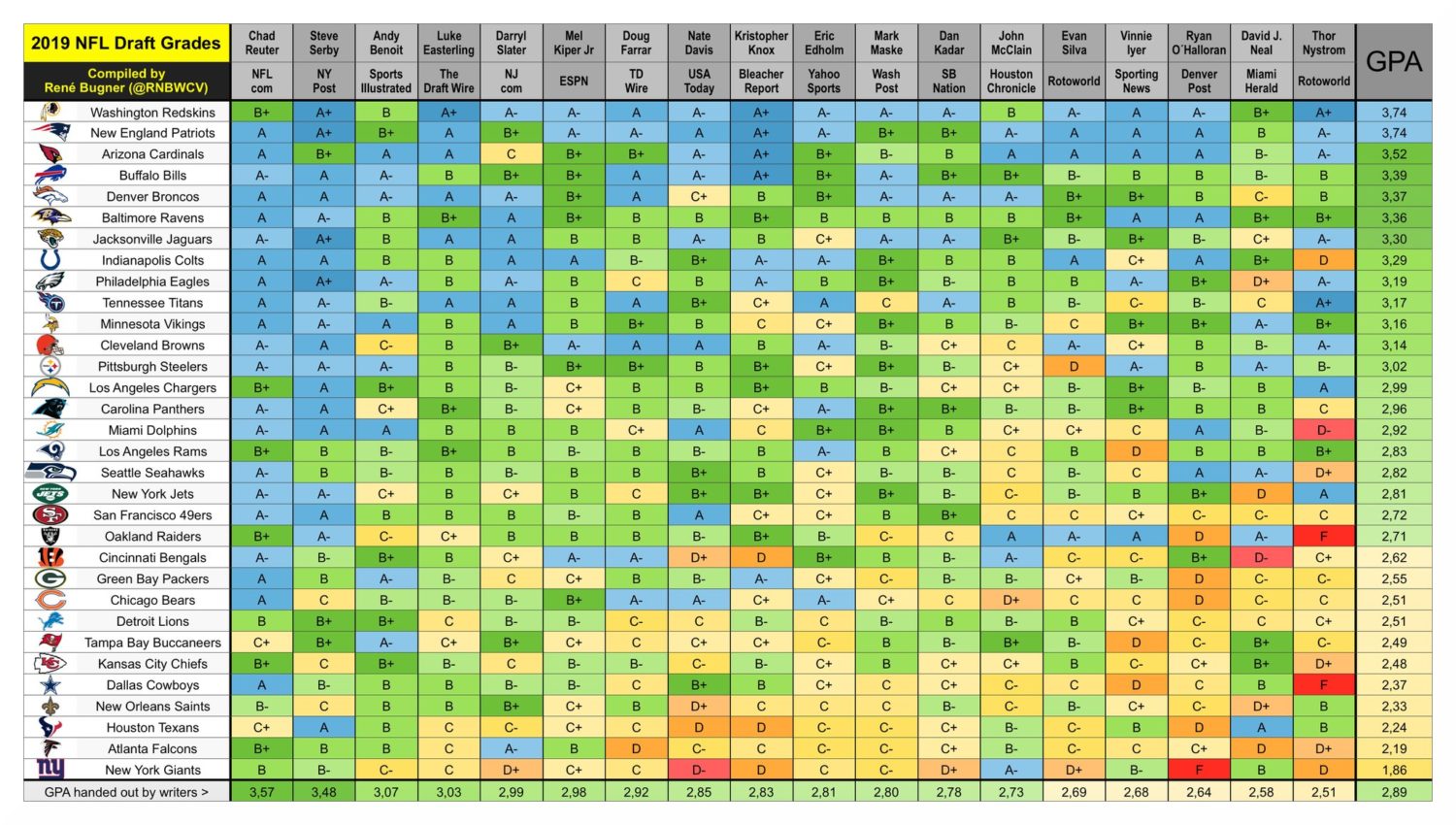 Shot #4 – Speaking of the NFL Draft, below are a few tweets from Twitter that are worth perusing. The second one shows the current selections all 32 NFL teams have for 2020 following this year’s draft. The second tweet is from Jim Nagy, the Executive Director of Reese’s Senior Bowl, and it includes a few names of players already on the 2020 watch list.

Working our way thru WR tape for 2020 @seniorbowl. Here’s a few names (in no particular order) to remember for next fall… pic.twitter.com/IOepP0ulP3

Shot #5 – Steelers defensive line coach Karl Dunbar once held that same position with the New York Jets from 2012-2014. During his time with the Jets, Dunbar was part of a short instructional video for the Jets website in which he taught pass rush moves such as the rip, the club, and the spin. Below is a copy of that video that I came across this past week.

Shot #6 – With wide receiver Antonio Brown no longer with the Steelers, is wide receiver JuJu Smith-Schuster now a top 5 fantasy receiver for 2019? ESPN fantasy analysts Matthew Berry, Daniel Dopp and Tristan H. Cockcroft recently discussed Smith-Schuster’s fantasy outlook for the 2019 season and you can watch that segment below.

Shot #7 – Finally, a few items on Steelers rookie inside linebacker Devin Bush, the team’s first-round draft pick this year. First, Jenny Vrentas, senior writer for Sports Illustrated, released a great post this past week explaining why Bush is uniquely built for today’s NFL game. The second tweet below is from former Steelers running back Merril Hoge and it includes him breaking down a play of Bush’s from Michigan’s 2018 game against Nebraska. Below his tweet is one from myself that shows that same play from a different angle as I believe it helps contextualize the play by Bush even better.

Devin Bush has worked since he was a kid to make sure his size was not only not an issue, but could be an advantage. How he and Devin White want to redefine the linebacker position in the NFL: https://t.co/R15zHSUfC3

Welcome to #steelersnation, @_Dbush11!! As I study tape on Bush, a few things really stand out. First, he is a great striker! He plays the game with leverage and has incredible speed vertically & laterally. pic.twitter.com/mI4vRAs7ny

Here is the TV angle of that play Merril Hoge just highlighted of Devin Bush's and it came from the 2018 game against Nebraska. I couldn't move half that fast if I were on fire. COD and speed #Steelers pic.twitter.com/82r4pCoYqI