Shot #1 – Former Steelers outside linebacker Greg Lloyd turns 54 today and below are some of his career highlights along with a story about him by Ed Bouchette a few days after he was selected in the sixth-round of the 1987 NFL Draft. 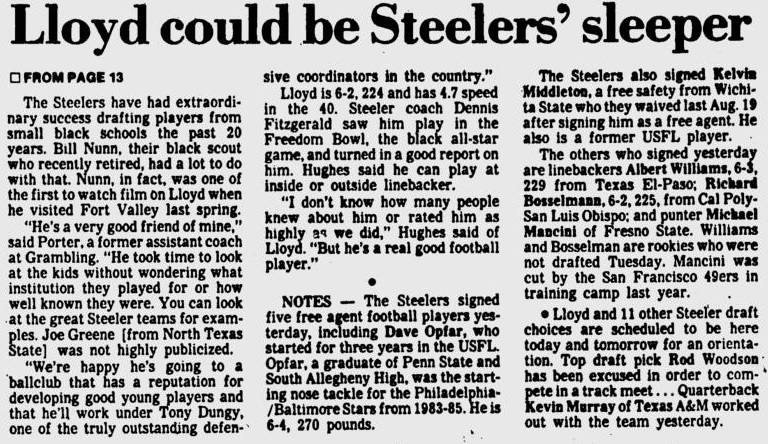 Shot #2 – In case you missed it, below is the commencement speech that Steelers tackle Alejandro Villanueva gave a few weeks ago at Saint Vincent College. He really did a good job with this and got his message across quickly.

Shot #3 – Former Steelers running back Merril Hoge recently provided a quick video breakdown of new defensive lineman Isaiah Buggs on his Twitter account and you can see that below. Buggs was drafted by the Steelers this year in the sixth-round out of Alabama.

Isaiah Buggs DE plays with great leverage by using his feet, hip and hands which allows him to control offensive blockers and get to the ball carrier. He plays smart and that is critical as you transition to the #NFL @BigPooh_91 #SteelerNation @steelers #HereWeGo pic.twitter.com/3f08a7bnth

Shot #4 – Another one of the Steelers sixth-round draft picks this year, outside linebacker Sutton Smith, a Northern Illinois product, got a little bit of work in at fullback during the team’s first week of OTA practice. Sutton was actually a really good running back back when he was a senior in high school at Francis Howell in Saint Charles, MO and below is a video of some his highlights from that 2014 season that illustrate that. There are also some defensive highlights mixed in as he played both ways.

#Steelers Sutton Smith in high school:
• Talented playmaker on both sides of the ball at Francis Howell
• As a senior tallied 2,456 all-purpose yards with more than 2,000 rushing yards & 32 total TDs at tailback
• As a junior, gained 1,682 all-purpose yards & scored 18 times

Shot #5 – While it’s easy right now to be down on Steelers second-year wide receiver James Washington following his disappointing rookie season, don’t go throwing him out with the bathwater just yet. Remember, Washington did some nice things last year during the preseason and that included him making some very tough catches. Below are highlights of Washington from the Steelers 2018 preseason to remind you.

If #Steelers WR James Washington can make plays like this in 2019, look out. Needs a quick start this season to gain back that confidence: pic.twitter.com/9niE74Yp1G

Shot #6 – If you’re looking for something to read during this holiday weekend, I highly suggest ‘Bill Walsh: Finding the Winning Edge’ by Bill Walsh, James Peterson, and Brian Billick as it’s the premiere football book for fans and analysts. This book is very hard to find because it stopped being printed a while ago. That said, it is available for free in PDF form online. 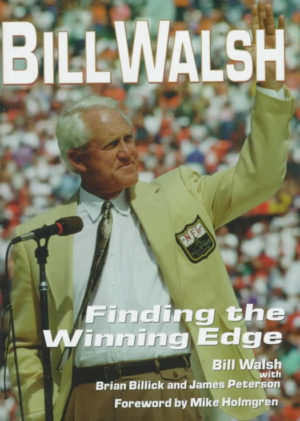 Shot #7 – CG Technology’s chain of sports books recently opened up spreads on every NFL game from Week 2 through Week 16 with limits set at $1,000. Below is a link that shows the opening spreads from Weeks 1-16 and you’ll see that the Steelers are underdogs in just three games in 2019. They are favored in 10 others. They are listed as underdogs against the New England Patriots, Los Angeles Chargers and Cleveland Browns in Weeks 1, 6 and 11, respectively.