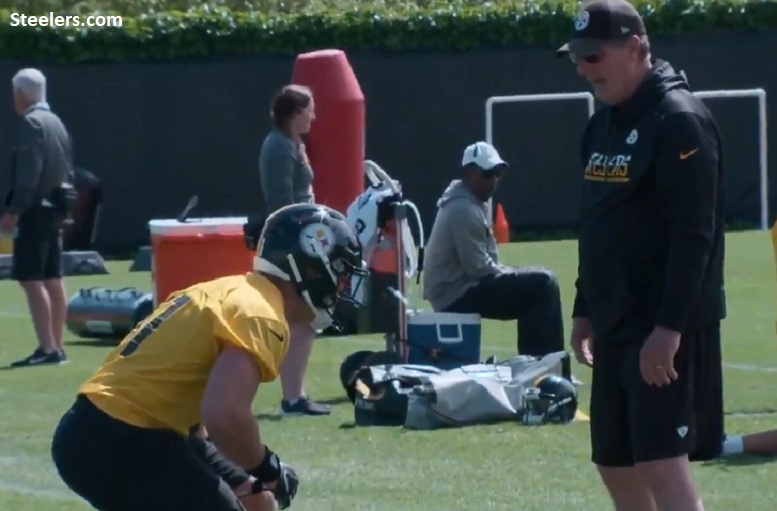 The Pittsburgh Steelers selected Sutton Smith in the sixth-round of the 2019 NFL draft out of Northern Illinois and while he’s certainly considered to be an undersized 3-4 outside linebacker at 6003, 233-pounds, his speed, agility and initial quickness certainly might ultimately help make up for that at the NFL level.

While Smith’s lack of ideal size is easily noticeable when you watch a large selection of his college tape, it’s easy to begin looking past his physical appearance when you see him consistently get to opposing college quarterbacks with relative ease. In short, Smith mostly was able to use his speed, agility and initial quickness to compile his 30 career college sacks. A lot of those included him beating tackles around the edge, and quite easily at that.

This past weekend the Steelers held their annual rookie minicamp in Pittsburgh at the team’s practice facility and it’s was Smith’s first opportunity to start showing that his lack of size won’t be an issue for him at the NFL level. During a media session this past weekend at the conclusion of one of the team’s three rookie minicamp practices, Smith was asked if speed is indeed a big part of his game.

“I think it plays a good part of it,” Smith said. “If you can get somebody offset a little bit, speed’s always going to help overcompensate for a little bit of size. I think if I can use my speed to the right effectiveness that we can have some fun out there.”

Smith, along with the team’s first-round draft pick this year, inside linebacker Devin Bush, are both considered to be somewhat undersized when it comes to the positions both play. Both, however, possess the speed, quickness and agility that few others have at their respective positions at the NFL level. At the conclusion of the Steelers Saturday rookie minicamp practice, head coach Mike Tomlin was asked to comment on how big of role the speed of Smith and Bush both possess played into them both being selected by the team this year in the draft.

“A factor – not the determining factor,” Tomlin replied. “Speed’s always going to be an element of this thing relative to positions and speed is an asset for those guys.”

In case you missed seeing his combine results, Smith ran his 40-yard dash while in Indianapolis in 4.69-seconds and his short shuttle in 4.32-seconds. He also posted a very impressive 3-cone time of 6.75-seconds and you can see that low number on his college tape when you watch him bend the edge and flatten out toward the quarterback. You can also see his quick get-off and favorite pass rushing move on tape.

Smith obviously has a lot to prove to the coaches the remainder of the offseason when it comes to him potentially making the 53-man roster but overall, it sounds like his first weekend’s worth of practices as an NFL player went well.

“They’re trying me out at outside linebacker right now to see how I do, which I think is going ok,” Smith said. “I think I’m doing pretty good at it. It’s a lot already coming on everybody’s plates, we’re just trying to take it all in and basically learn what we’ve got to learn.”