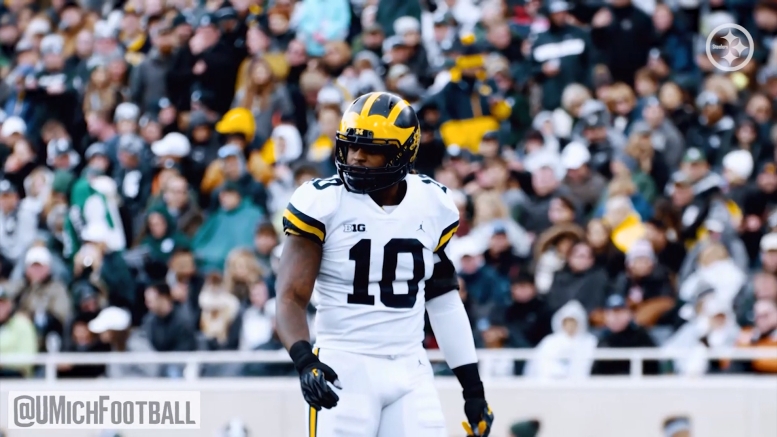 A lot of people were concerned about the size of Miami linebacker Sean Spence when the Pittsburgh Steelers drafted him in the third round of the 2012 NFL Draft. At just 5’11” and a little over 230 pounds, would he be able to hold up in the trash pile in the middle of the defense.

We never got the opportunity to get a sure answer to that question after he suffered a severe knee injury during the preseason of his rookie year that kept him out the next two years, an injury that entailed tears of multiple ligaments, the dislocation of his knee, and damage to his nerves behind the knee cap.

Given that they were willing to pick up a player of that profile seven years ago, then, it shouldn’t be much surprise to learn that the Steeler never expressed any concern over the size of Devin Bush out of Michigan before making him their first-round selection last month, according to his defensive coordinator at the school, Don Brown.

Brown told Jeremy Fowler for ESPN that he was contacted by a number of teams regarding Bush and many of them asked about his size and whether or not they thought he would be able to hold up. “There’s nothing this guy can’t do”, he would say. “I don’t know one thing he can’t do”.

While Bush’s college statistics might not necessarily pop out at you, especially if you compare them to a Ryan Shazier, for example, you see the do-everythingness that Brown talks about when you actually watch him on film. A lot of the plays that he makes go far beyond the box score when you really evaluate what he is achieving.

“Some guys just can’t quantify it. He can”, Brown said of Bush being able to mitigate his size and play football. “Some guys have it and some don’t. He gets it and gets it fast. You hand that ball off to the tailback, I have a good feeling in my stomach we’ll get him on the ground because of Devin”.

That’s the same feeling Mike Tomlin and Keith Butler are really excited about bringing back to the Steelers’ defense. Admittedly, that wasn’t even something that they always necessarily had with Shazier in the lineup, because while he made a lot of plays, he also missed a high volume of tackles. But even those missed tackles regularly set up another teammate to clean up.

Brown also said of Bush’s character that it’s “tremendous”, and that he has absolutely zero red flags. When you add all of this up, you get the Steelers trading was a pair of Day-Two draft picks to jump up 10 spots in the first round to go an get him. You think they might think he’s special?