A player’s rookie season is very important in their development, it brings a ‘Welcome to the big leagues’ sentiment and can be a very difficult experience for many young players. Surviving a rookie season is a major accomplishment but it is only half the battle. For many players, their sophomore year is equally or even more important in their development. Now that the player has experienced a full year of NFL preparation and physicality, their sophomore year is a measuring stick for if they can endure longevity in the NFL. No sophomore on the Pittsburgh Steelers has more at stake than perhaps James Washington.

After a rookie season that was troubling at times, Washington heads into a sophomore season that will see him face a multitude of challenges, though those challenges can also be classified as huge opportunities. With the loss of Antonio Brown, the Steelers are looking for another receiver to step up alongside JuJu Smith-Schuster and in a crowded receiver room, Washington will have every opportunity to rise to the occasion. Luckily for him, the Steelers have seen a lot of improvement in their receivers as they progress from their rookie to sophomore seasons.

Smith-Schuster and Brown are just a couple of the receivers that the Steelers have seen take a big jump from year one to two. While there is plenty of reason to be down on Washington based on what he showed during majority of his rookie season, there are many reasons to be optimistic in the Steelers’ development of receivers. Below is a chart of all the receivers the team has drafted since 2009 and their production from year one to two. 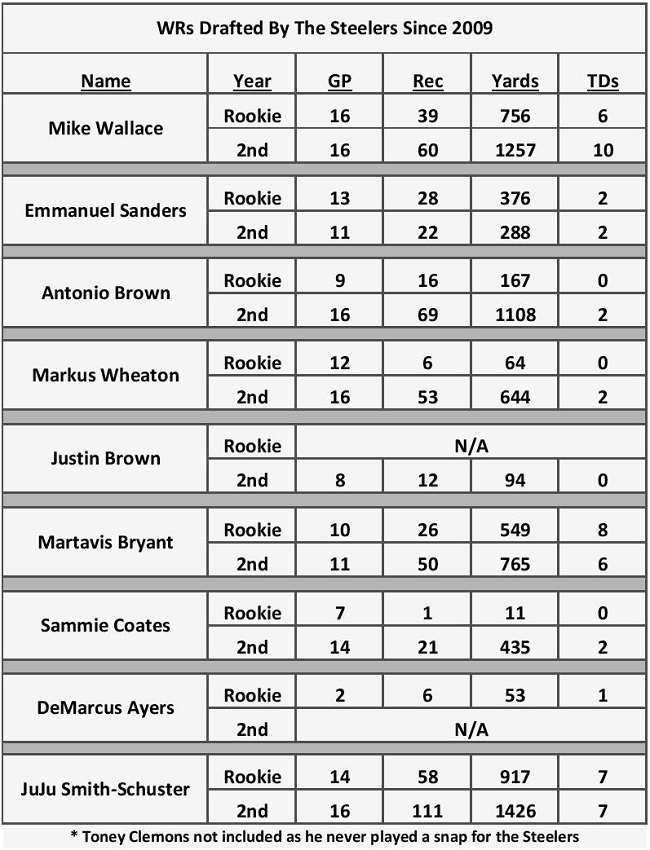 Many Steelers’ receivers have improved during their second season. Mike Wallace stepped up and became the team’s primary receiver during his sophomore year. Brown and Smith-Schuster did the same during their sophomore seasons. Then there are the cases of Markus Wheaton and Sammie Coates who did not play much during their rookie seasons but contributed greatly during their sophomore years. Martavis Bryant also took a step forward after a great rookie season. From a pure statistical standpoint, only Emmanuel Sanders and Demarcus Ayers did not take the next step though Sanders battled injuries and would have a great third year and Ayers was cut before he got a chance.

What does this mean for Washington? Well, after a season in which he posted 16 receptions for 217 yards and a putrid 42.1 catch percentage, there is some optimism in improvement. The Steelers seem to know what they are doing as they develop receivers almost effortlessly. The only receivers who have completely flopped over the last decade are Ayers, Justin Brown and Toney Clemons, though all three were late round selections and not really expected to contribute much.

The only obstacle that may stand in Washington’s way is others like him. The departure of Brown has created a massive void in the Steelers offense and the team added a lot of talent to burden the loss. There is a good chance Washington takes the next step in his development but he is going to have to beat out the likes of Donte Moncrief, Eli Rogers, Ryan Switzer and Diontae Johnson to do so.