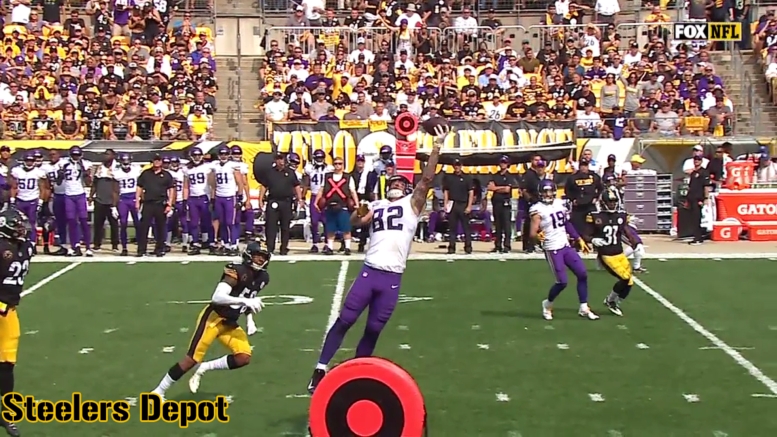 I figured that this was a topic that could well go unaddressed, but after I started seeing it on actual Pittsburgh newspapers’ websites, I thought it ought to be commented upon: the Pittsburgh Steelers are not going to pursue an acquisition for Minnesota Vikings tight end Kyle Rudolph. Or, at the very least, it’s highly unlikely that they will.

As the blogs of just about 25 or so teams around the league are blowing up to post articles about whether or not the teams they cover should be going after Rudolph, my approach here is different. Simply, they’re not going to, and if for no other reason that, from a salary cap perspective, they can’t afford to.

While the veteran tight end has been the subject of trade rumors in recent days, stemming from the Vikings’ own salary cap situation and the fact that they used a second-round draft pick to bring in Irv Smith, Jr. in last month’s draft, there is no saying that Rudolph will actually be traded, let alone released.

In fact, the Vikings actually cleared some salary cap space yesterday by restructuring the contract of linebacker Erick Kendricks. Granted, it wasn’t much, and they still have less than $3 million in salary cap space now, but, again, that doesn’t mean that a deal is imminent.

Rudolph himself has been clear in saying that he is not interested in being traded. “We’re going to do everything we can to be here”, he told reporters recently. Though he also acknowledged that a trade is a possibility. Head Coach Mike Zimmer offered, “we expect Kyle to be here, but sometimes business gets in the way”.

Let’s say business does get in the way of the Vikings retaining Rudolph and they have to trade him away. Are the Steelers a reasonable destination?

Reality check: no, they’re not. Pittsburgh only has less than $1.5 million in salary cap space now on a Rule of 51 roster, with Justin Layne still left to sign. Remember, the 52nd and 53rd players, plus the entire practice squad, and an in-season fund of at least a few million, still have to be accounted for.

And Rudolph? His cap hit in 2019 is $7.625 million. And that is almost pure base salary, plus $250 thousand in per-game roster bonuses. His pro-rated portion of a five-year contract extension that he signed in 2014 is gone.

To even entertain this as a not-insane idea, the Steelers would have to work out an extension prior to the trade that would allow them to greatly lower his cap number for 2019. Rudolph, who will turn 30 in November, his heading into his ninth season. He has caught 386 passes for 3787 yards and 41 touchdowns in his career.