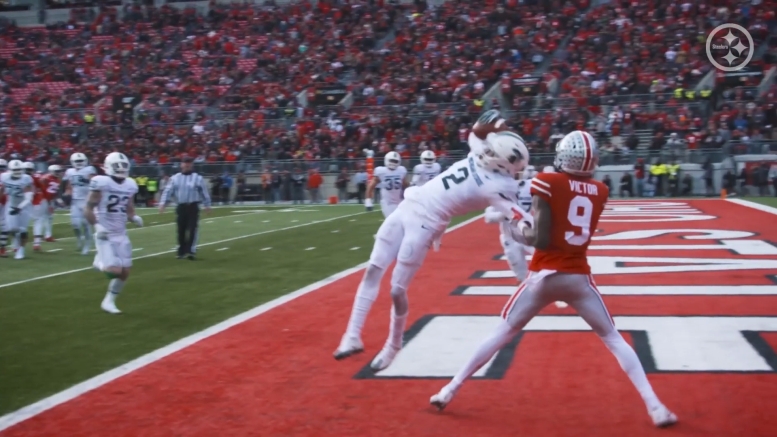 Justin Layne played three seasons at Michigan State, totaling 31 starts before the Pittsburgh Steelers made him a third-round draft selection last month. He comes to the team as a young, tall, athletic project, who had a total of three interceptions in his college career, never more than one in any single season.

The Steelers are not concerned about his potential to increase that number as he makes the jump from the college level to the pros. He has all of the physical traits that you would look for in a cornerback, which provides an automatic leg up in a major way, but they’ve also been sold on this area of his game through other avenues.

“I think when you look at the college passing game, the ball’s not being thrown as much as they’re going to see in our League”, defensive assistant Teryl Austin said of Layne’s college interception total after the selection was made. “I think with more opportunities he’s going to have an opportunity to get some interceptions. I’m comfortable with his ball skills after watching him play and talking to people and being at his workout. And I’m comfortable with where he is and it’s just a matter of turning that into production at this level”.

The Steelers’ comments made from General Manager Kevin Colbert and Head Coach Mike Tomlin strong indicated that they wanted to focus on players at the college level who have proven to have ball skills, after they finished with just eight interceptions in 2018, a figure that they would ordinarily double in a good year.

Layne adding one interception per season isn’t exactly going to cut it. But just because a player has a low interception total in college doesn’t mean he can’t increase that number at the next level. It’s not the same position, but just look at what Ryan Shazier did. Hell, Troy Polamalu only had six interceptions, including one the year before he came out.

Layne did record 15 passes defensed for the Spartans last seasons, indicating that he is able to get to the ball a lot. If he can get there a half-step earlier and convert a couple more of them from passes defensed into interceptions, that would make a big difference, of course.

The rookie could possibly have a path toward playing time during is rookie season if he really shows up, largely thanks to Steven Nelson’s versatility to play inside. If Layne proves that he is one of the top three cornerbacks on the roster, then he can take over the nickel role from Mike Hilton and play on the outside, or at least be used situationally when the team would prefer to have size for a certain situation or matchup.