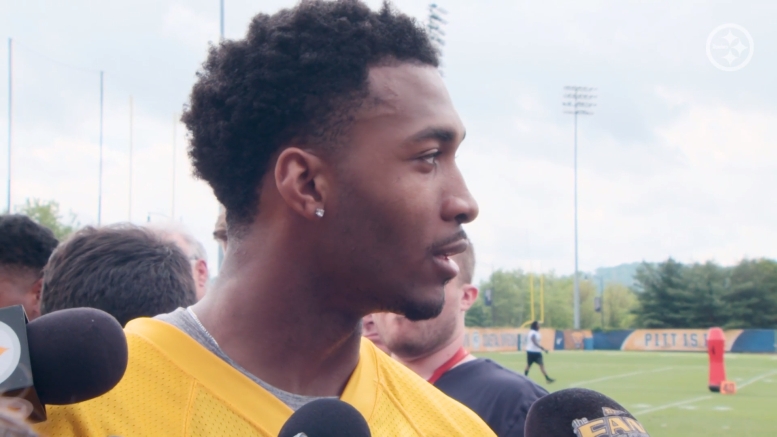 Justin Layne remains the Pittsburgh Steelers’ only draft pick yet to sign, but that is the only thing that is notable about that fact. They still have plenty of time to get all of their rookies under contract. Rookie minicamp barely came and went, so we are very early in the process.

Layne is also very early in the process of his professional career as he continues his growth into his position as a cornerback. He was recruited to Michigan State to play wide receiver before making the position switch in his rookie season, even making starts at cornerback by the end of that year.

One area of his game that he is very much looking to improve is his numbers, specifically his interception total, and that has been the primary topic of focus regarding Layne since he was drafted, especially given that the Steelers only recorded eight interceptions as a team in 2018. But he believes he has the skills to get the job done in that phase, even if he never picked off more than one pass in a season.

And he believes that his background of playing wide receiver helps him in that regard. To his credit, while he only intercepted one pass in 2018, he was among the nation’s leaders in college football with 15 pass breakups, so he knows something about where the ball is going to be.

“I can just play the ball in the air. I feel like that’s one of my strengths”, he said about how playing on the offensive side of the ball has informed his conversion to working at cornerback. “Just playing receiver, I feel like I already know what they’re going to do and their route combination”.

Layne is far from the first cornerback to make the conversion from playing wide receiver—another one is already on the roster in Brian Allen, and Richard Sherman is perhaps the most well-known, at least in recent years—but it’s still a process that does not come immediately for all, and never for some.

The Spartans asked Layne to make the conversion to cornerback as much because of the defensive need at the position as for anything else, as his college coaches have said. It wasn’t about his ability to play wide receiver or to make catches, the quality of his hands, as it was the mere fact that they needed cornerbacks, as emphasized by the fact that he started seven games for them in the year that he made that change.

But there’s more to intercepting a pass than knowing how to catch and being able to project where the play is going to go, and that is the next step that Layne is working on taking as he makes the transition to the professional level. That is the key to unlocking the door to the turnovers that the Steelers’ defense desperately needed last season.