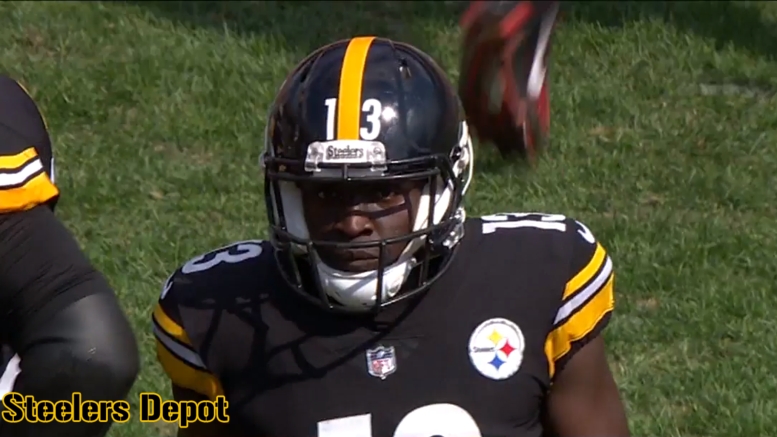 After a year experiencing what the NFL is really like, it’s common for players to make big changes heading into their sophomore season. In Pittsburgh especially, there’s been numerous examples of guys dropping weight in order to be faster, more conditioned, and overall in better shape heading into that all-important Year Two.

Consider James Washington as one of those guys. According to this tweet from Steelers.com’s Teresa Varley, Washington said he lost 15 pounds during the offseason and feels much better for it.

WR @JamesWashington said he lost 15 pounds this offseason by working on his dad's farm and working out. Said he is feeling great now. Earned words of praise from @_BigBen7 on Tuesday. #Steelers

At the 2018 NFL combine, Washington weighed in at 213 pounds so it sounds like he gained some weight last season. As a vertical threat without blazing speed, he ran in the 4.5’s coming out of Oklahoma State, any attempt to become lighter and faster is probably good for him.

Again, dropping weight after a rookie year is pretty common. It’s happened to nearly all the running backs in Pittsburgh. Le’Veon Bell entered the NFL around 244 pounds. By his sophomore season, he went down to 225 and in 2016, was under 215. James Conner did the same last year and Jaylen Samuels said he was working with a speed trainer during the winter with the goal to drop some weight and get faster. On the defensive side of the football, Bud Dupree also lost 20 pounds after his rookie campaign and Terrell Edmunds is looking pretty swole if you’ve seen photos of him from spring practices.

Washington will become one of the offense’s X factors. Not that any one player will be responsible for replacing Antonio Brown’s production, that’d be ludicrous, but he’ll have to make a major jump for this offense to remain the strength of the team. He ended 2018 on a better note, catching three passes for 60+ yards against the New England Patriots and Cincinnati Bengals. The goal is for him to become the team’s Z receiver, letting JuJu Smith-Schuster play more snaps inside, where he’ll function best.

Clearly though, work ethic isn’t going to be an issue for Washington. We might not know much about his game yet but every report on him is that he’s quiet, eager to learn, and willing to work. Pair him with a Hall of Famer like Ben Roethlisberger and it’s easy to see a much different version of Washington in 2019, both in weight and play.