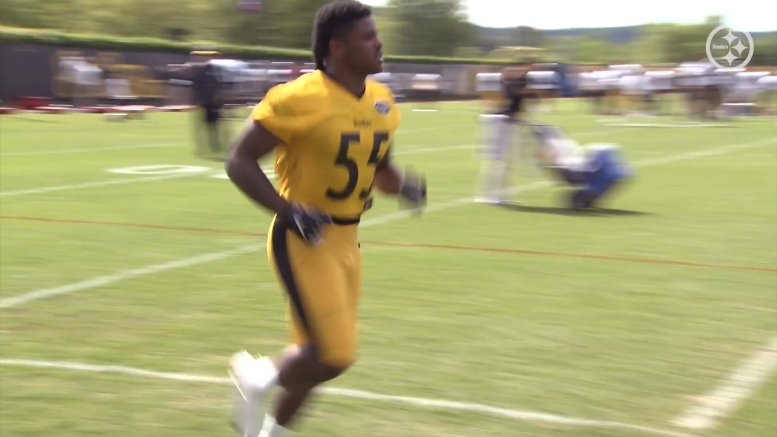 It hasn’t quite been the same start as Ryan Shazier during his rookie season in 2014 when he was immediately installed as a full-time starter, but 2019 rookie first-round pick Devin Bush isn’t being treated much differently.

He did not take the first snaps of the offseason with the first-team defense, but he along with Vince Williams and Mark Barron all rotated heavily working with the group in OTAs so far, perhaps as they figure out which combinations they like. And he got his turns calling the defense as well following a couple of weeks with the playbook.

“It’s a good starting point. His first day to get used to us”, defensive captain Cameron Heyward said of his first impressions on the rookie. “We were already kidding him about when he was calling the plays, he’s got to get some bass in his voice, but that’s just us messing around. He’s gonna be good, and we’ll break him in”.

It is a joke, but there’s also some truth to it. Whoever is calling the plays also has to be a very clear and projected communicator. He seemed to have gotten strong reviews in that department during rookie minicamp, whether he was calling out the right plays or not, but the veterans may have a different standard.

Of course, before we can talk about Bush calling the defense, we have to determine how much he is even going to be on the field, as it is fully possible that he does not earn a starting job over the course of his rookie season, or at least to start the year.

“We’ll see. I can’t determine it right now”, Heyward said of making any snap judgments on the new inside linebacker group and who would emerge at the top. “We’re not even in pads yet, so you just try to make sure everybody’s on the same page, everybody can communicate, especially for a younger guy to put that much on his plate”.

“You’ve got to make sure that you stay on him, keep talking to him, make sure he’s engaged”, he added. “But you’ve got a guy like Mark Barron who’s been there and done a lot of good things, so we’ll see how everybody progresses”.

They have plenty of time between now and the start of the season to figure out who is going to be playing where, but you do want to get your mouthpiece of the unit in place as soon as possible. If it is Vince Williams, then it’s not really a big deal, since the team has heard his voice for years now.

If it’s Barron, or especially Bush, then it’s a little more complicated. You don’t want to decide late in the process that he’s going to be calling the plays, though whichever of them starts among them will be a part of the chain of communication regardless of whether or not they wear the green dot.