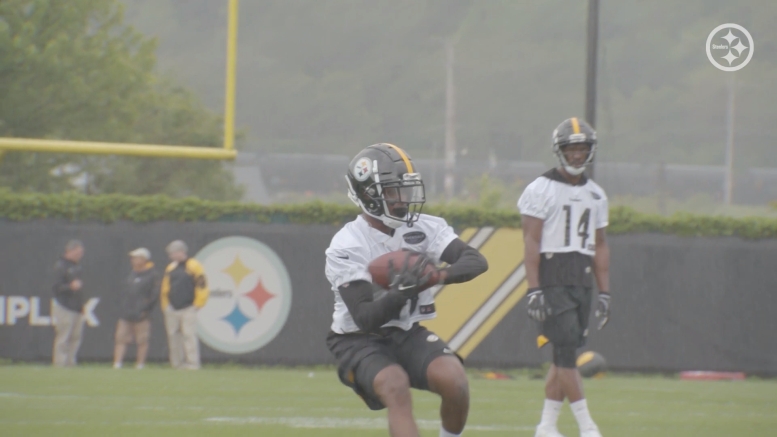 There isn’t a lot to say about rookie minicamp, since it’s largely an instructional, informational, and opportunity period for young players. Pretty much the only significant stories that ever come out of them are whether or not somebody was signed, released, or injured.

The Pittsburgh Steelers’ rookie minicamp this past season was unusually newsworthy, given that they waived five players and signed five after the fact. But there was also some question about their second-highest draft pick, third-round wide receiver Diontae Johnson, and why he spent a lot of the three-day period watching his teammates from the side.

There has been no official answer with respect to that by the team. I don’t believe any members of the media even asked Head Coach Mike Tomlin about Johnson when they had the opportunity to do so on the second day of rookie minicamp.

But those in attendance were obviously aware of the fact that he wasn’t on the field a lot of the time. specifically, multiple reporters relayed that while he did participate in some capacity during individual drills, he was held out during team drills.

The closest I have seen to anybody giving an actual answer was Gerry Dulac, who said in a recent chat session that “he was hurt”. He said that “he was there on the field” but “just didn’t do anything”, although we know that that is not quite true. There is even video on the team’s website about Johnson going through some individual drills.

It was largely assumed by most that Johnson was dealing with some type of minor injury that the coaching staff simply wanted to be cautious about, given the relative insignificance of rookie minicamp, and Dulac’s comment seems to suggest that that is the case.

Limiting him gives him two weeks to rest before OTAs kick off next week, and a better opportunity to hit the ground running when some of the more serious work begins. Rookie minicamp is more about learning concepts than doing work on the field for the players. The on-field portion is more about the coaches seeing what the young players are capable of doing.

There is an opportunity available for Johnson to play a significant role as a rookie following the Antonio Brown trade, with the two primary contenders to succeed him in the starting lineup, second-year James Washington and veteran free agent Donte Moncrief, either yet to prove themselves or seen more as a bridge option.

Provided that he remains healthy and develops as predicted—he is already regarded as a fairly advanced route runner and in his work against press coverage—there will be a role for him, perhaps even a starting role by the end of the season. There’s no need to rush him along right now.