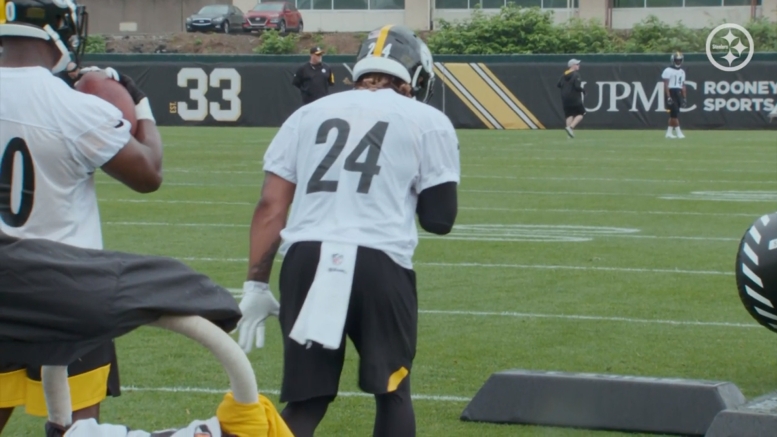 Every year, the NFLPA takes one or two players from each team and invites them to their rookie premiere event, held in Los Angeles this year, to give them the basic tools they need to succeed in the league off the field. For the Pittsburgh Steelers, 3rd round pick Diontae Johnson and 4th round pick Benny Snell are there.

The union just tweeted out the “class photo” of the 40 players in attendance. You can see Johnson in the second row and Snell in the back.

Part of the event is one to hang out with fans, sign autographs, all that fun stuff. But it’s a valuable resource for players too, helping them understand the marketing/branding aspect of the game. The league’s website describes the event as:

“NFLPA Rookie Premiere is one of the most valuable opportunities, exclusively available to NFLPA partners, because it’s the first time for these partners to connect directly with professional football’s most promising and marketable young stars–all in one place—and build content and relationships that extend into the season and beyond.”

JuJu Smith-Schuster attended the three day event back in 2017 and has quickly gone on to become one of the most recognizable – and likable – faces in football. There’s a pretty good chance he’s making more money from his sponsors and Youtube channel than he is from his rookie contract. His status is to the point now where he’s the biggest draw at training camp, even surpassing Ben Roethlisberger and pre-blond mustache Antonio Brown.

Snell is definitely a player who, and I apologize for putting on my Darren Rovell hat here, feels marketable. High energy, good personality, and it’s pretty obvious already the dude is going to be a fan favorite in Pittsburgh. He’s the kind of guy who is going to sign every autograph in Latrobe. Of course, he’ll need to make an impact on the field for him to earn league-wide attention and he’ll have a tougher path than say, Smith-Schuster in his rookie season.

On Instagram, Snell shared this photo with him and his new #24 jersey.

I’m proud of you Snell

Johnson posted this one of him in full pads for the first time.