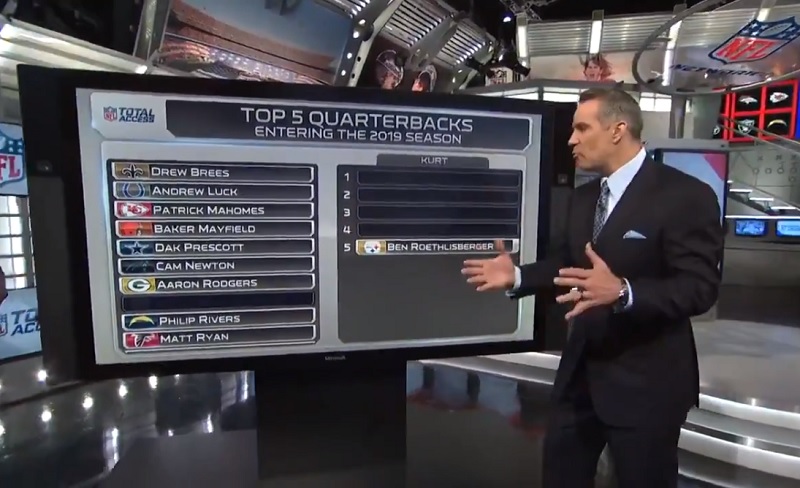 Is Pittsburgh Steelers quarterback Ben Roethlisberger indeed top 5 in the NFL when it comes to his position? Former NFL quarterback Kurt Warner believes he is. This past Monday, Warner revealed his top five quarterbacks for the 2019 season on the NFL Network and he had Roethlisberger ranked fifth behind Tom Brady, Drew Brees, Patrick Mahomes, and Aaron Rodgers.

Who are @kurt13warner's *TOP 5 QUARTERBACKS?

“This is a tough one for me, I had a few guys I was wrestling with here,” Warmer said after announcing that Roethlisberger was fifth-overall on his list of top 5 quarterbacks for 2019. “But I just think where he’s come as a passer, he has grown so much. You know he led the league last year in passing yards, 5,100 yards, first time over 5,000 yards. But I just love what he does. It’s going to be interesting this year without A.B. What’s he going to look like? But I just love the way he is and the complete player he is at this time of his career.”

Roethlisberger’s league-best passing yardage and passing attempts last season was mainly a result of the Steelers offense needed to navigate so many long fields as the term’s defense only recorded 15 total takeaways and the return units rarely popped a big play. Also, it’s important to keep in mind that Roethlisberger was the king of the dink and dunk pass attempt in 2018 in addition to being a quarterback that got rid of the football quickly.

We figure to see the same version of Roethlisberger in 2019 that we saw in 2018 only with about 100 or so less total pass attempts and hopefully half the amount of interceptions. It’s hard ti imagine Roethlisbefger throwing for more than 5,000 yards in 2019 as well and especially if the Steelers defensive and special team units to a better job of providing more shorter fields for him to work on. While the loss of Brown this offseason will make it more challenging for the Steelers offense in 2019, but do keep in mind that they still have a nice looking wide receiver depth chart entering the summer just the same.

Roethlisberger doesn’t need to finish in the top 5 of any statistical category in 2019 for the Steelers to ultimately win the Super Bowl. As long as he completes 65% or more of his total pass attempts, relocates his deep passing accuracy of a few years ago and lowers his interceptions thrown, the Steelers should have a good shot art not only winning the AFC North division in 2019, but making a deep playoff run as well.