Welcome back to your weekly edition of the mailbag. Hope you’re all having a good one. Getting back to football now with rookie minicamp slated to run from tomorrow through Sunday. As always, we’re here to answer whatever is on your mind for the next hour.

Michael James: Hey Alex, objectively rank the quality of the rosters in the AFC North – without taking QB into consideration!

1. Pittsburgh. By a nose over Cleveland and hey, I guess I’m biased. I took Pittsburgh just because of how strong they are in the trenches. Stronger than the Browns or Ravens.

2. Cleveland. For all the talent they added. Really a great offseason for them.

3. Baltimore. Just because there are some holes in that defense though I think there are internal options (Kenny Young for CJ Mosley) that most people don’t know about. It’s fair to say the Ravens should feel slighted. Seems like they get lost behind Pittsburgh and Cleveland, the two teams who stole the headlines, but they’re the ones who actually won the division.

4. Cincinnati. The easiest one here.

WeWantDaTruth: Hey Alex. Where do you rank our D line right now? How does it stack up against the Browns O line? I see this as being an advantage for us, but I don’t feel we have the best depth on the D line.

Alex: Like I said above, my answer here isn’t going to be great relative to other teams. The Steelers have a really good defensive line though. Tuitt just needs to take that final step we’ve been waiting on. Finishing plays, getting into that 7-8 sack range with Heyward circling double-digits.

Depth might not be ideal but Alualu is solid against the run and Buggs will bring some juice as a pass rusher. Buggs > Walton so in that respect, the d-line got better.

Chris: Hey Alex, any chance the Steelers investigate signing Tre Boston at FS now that the compensatory period has passed? I think he could be had cheap ($1.5 mill last year) on a 1 year prove it deal and would provide an upgrade over Sean Davis in coverage.

Alex: Don’t count on it. Dave Bryan outlined pretty well the lack of history of making notable signings even outside the comp window. Boston has been a weird story. Good player, always seems to produce, but bounces around from team-to-team on one-year deals. Why? I’d love to know the answer.

Rick Williams: Hey Alex, assuming one makes it, PJ Locke or Dravon Askew-Henry, who is your pick for best fit for the Steelers?

Alex: I haven’t put on Askew-Henry’s tape yet. But Locke has the right skillset to be a special teamer. Tough, physical, willing to sacrifice his body. He’s just gotta clean up how reckless he is. Leads to too many misses. But as Tomlin says, better to say “whoa” than “sick ’em.”

CP72: Alex,
People seem ready to hand carries to Benny Snell. I personally feel like the season that Jaylen Samuels had last year isn’t talked about nearly enough. What’s your evaluation of Samuels overall from 2018?

Alex: Definitely played more than anyone probably expected. I thought he held up reasonably well. Even his pass protection was a little better than what I thought it was going to be. But I don’t think he did anything that cements him as a #2 going forward. That’s why they looked at as many running backs as they did. Don’t want to get too hung up on one good game against the Patriots and call it a day.

We’ll see what his jump Year 1 to Year 2 is. Expect him to come in slimmed down, a little quicker, little more long speed.

But. I agree with your general premise. Snell will start as the #3. We’ll go from there. His run style is probably more defined than Samuels though.

ImMikeD: Hey Alex. Who’s doing Latrobe from the SD this year and what position group would you be watching most closely if it is/were you?

Alex: Hey Mike. I’ll be there, like always. And Tim Rice should come up for a few days to snap more great photos.

I go in watching every player, every group, obviously. I don’t want to put blinders on and become hyperfocused with one player or one group. Treat them all the same.

But obviously, you’re going to pay a lot of attention to the receivers and secondary. Who is working slot. The status of Hilton/Sutton. Justin Layne’s progress. Marcus Allen in dime.

At receiver, James Washington’s progression. How Donte Moncrief fits in the offense. Diontae Johnson’s impact. And where everyone is lining up. That’ll be a pretty large storyline throughout.

Been lurking on the site for a while, ginally decided to jump in the comments.

If we decide to deploy smaller/faster LBs, do you see this as a means for more mins for Shadetree or bigger NTs moving forward? Love Hargrave, and think he’s vastly underrated, just curious.

Alex: Hey BB! Glad to have you jumping in the comments section.

Nah, I don’t think it changes how they approach NT. You’ve seen how the game has shifted there, just as it has with the LBs. Hargrave isn’t Casey Hampton. He’s not Sam Adams or Kris Jenkins. You want everyone on your defense to be athletic, mobile. All guys who can rush the passer, one gap, penetrate, disrupt, and chase after the ball.

Going lighter and smaller at LB doesn’t mean that the d-line is changing. It means the Steelers are finally catching up to how they transformed the defensive line for the better. Adding Tuitt and Heyward, bonafide pass rushers, with Hargrave at the nose. If you’re “just” a run stuffer, whether that’s d-line or linebacker, you can’t start anymore. Simple as that.

gjnn: Hi Alex – who do you think are the most likely candidates to take DHB’s role as gunner on special teams? WR room looks thin on options – is this Artie Burns’ best route to making the 53?!

Alex: That’s a good question. Not going to be a wide receiver. Unless Trey Griffey/Tevin Jones makes the roster, that’s unlikely, no one in that room fits the DHB role. So it’ll be a corner. Burns probably isn’t going to be that guy though yes, he needs to play well on special teams (as all bubble guys do).

Justin Layne might do it. Brian Allen remains in the mix. Watch out for two other corners. Herb Waters and Alexander Myres. Latter is a UDFA out of Houston. Myers had 7 STs tackles last year.

Ryan Barton: What do we need to do to convince the Steelers to go back to the block style number font?
Also, if you had the authority to make any uniform changes for the Steelers, what changes would you make?
Personally, I really like their color rush uniforms. But I think I could settle with just the number font change back to what it used to be. Which would basically just be their throwback uniforms that they wore last season.

Alex: I honestly think very, very little about the jerseys. Doesn’t much matter to me as long as they win in them. I agree though, the color rush jerseys are really sharp. Some teams had really ugly styles. Not the Steelers.

I would want more throwbacks though. Give me the 1933 mosaics they wore back in the 90s. 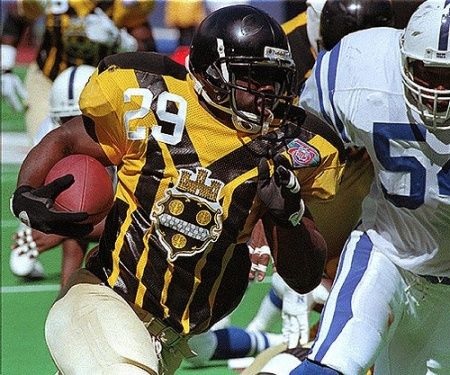 Those are hideous and I love them for it.

Felipe Brites: Hello, Alex! First time posting here.
Do you see any major difference between Ulysses and Sutton right now, and really there is only one spot for either in the 53 final roster?
Hope to join you more here!

Alex: We hope to have you here too! In my roster prediction, I had them battling for the 9th and final linebacker spot. There are differences with the two. First and foremost, starting with where they play. Sutton Smith is an OLB, Ulysees Gilbert III an inside linebacker.

For year one, that won’t matter much knowing they’re making the team for what they provide on special teams, not defense, but you can – and likely will – see them on the field together during the preseason.

It’s just hard to see both making it. That means keeping either 10 LBs or cutting Tyler Matakevich. Cutting one of Gilbert/Sutton is more likely than those two things happening. Of course, one injury is all it’ll take to give them each paths to make it.

Jeremy: Hey Alex! Rookie Minicamp is here (almost)! Who do you think we will be hearing about impressing/surprising this weekend?

Alex: Hi Jeremy! It’s hard to say for sure and you take it with a grain of salt. This week isn’t so much about impressing as getting the basics down. How a Steelers (and NFL) practice operates. Install basic components of the playbook (base runs, throws, coverages). Playing fast, playing smart, not playing sloppy.

Obviously, you will get a good read on what players are ahead of others but it’s still not going to tell you much until you get the whole team together for OTAs. Of course you’d expect Devin Bush to be at a different level than the tryout linemen he’s going up against.

But you’ll probably get the “flashy” stories. A great route by Diontae Johnson (run on air without contact allowed). Justin Layne skying for a breakup deep downfield. Zach Gentry plucking a throw over his head. The usual stuff.

I’m excited to see the whole roster. Want to see who the first-year players are eligible to participate (will Lavon Hooks get another year? lol) and the full list of tryout players. Should be released soon. Later today.

That’s all for this week. Thanks for stopping by everybody.