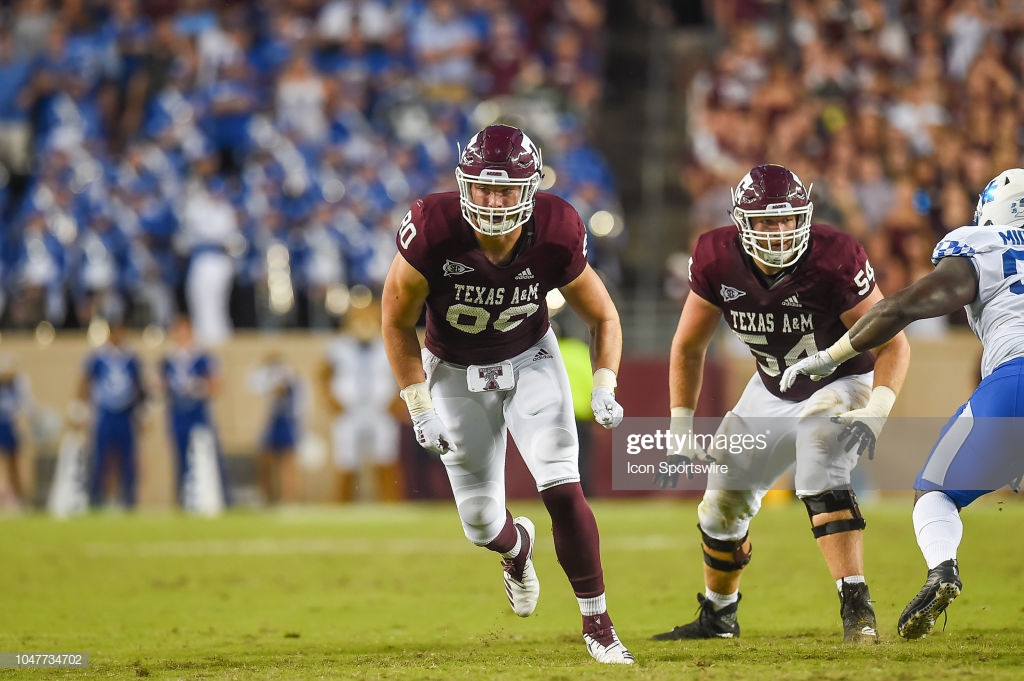 Trevor Wood (#8/80) was signed as a UDFA after his season at Texas A&M. He was a graduate transfer that came over from Arizona. His decision to transfer was based on wanting to stay on offense and go to a school that utilizes their TE’s more. Unfortunately the Aggies already had Jace Sternberger so while he was used more, his numbers didn’t increase.

At Arizona, he played for an offense that used a lot of 10 and 20 personnel and was rotated with another TE limiting his time on the field.

In the passing game, he lined up on the wing and inline and ran a very limited routed tree at Arizona that consisted mainly of short area routes like flat and curls. At A&M they did add to mixing in intermediate and seam routes. His speed and acceleration is marginal and he lacks the ability to separate from defenders in his routes.  He showed soft hands and looked comfortable adjusting to poorly thrown balls and tipped passes. After the catch he works hard to use physicality and strength to gain yards.

Vs UCLA from the right wing he runs what looks like a Texas route, pressing to the outside to move the defender before cutting inside and adjusts easily to a ball slightly behind him. And celebrates by knocking down and offensive lineman.

At Oregon, from the right wing he slips out into the flat, adjusts up for the ball for a modest gain.

Vs Clemson, from the right wing he runs a whip route and shows good concentration catching a tipped pass that was intended for a teammate.

As a run blocker, he has to improve the consistency of his quickness at the snap moving forward or laterally. He shows the ability to show good burst but it varies. He has good hand placement and leg drive and shows the strength to displace defenders.  He can be used to lead through gaps, work to the second level and hustles to get more blocks downfield when a teammate gets a big play. He shows good sustain and plays to the whistle finishing his blocks. He’s more suited for a Power/Gap running scheme than a Zone scheme that is more reliant on quickness. He’ll get out over his toes with forward lean getting him off balance. In space, he needs to breakdown a little sooner and come to balance and not over extend his reach going after a defender.

At Utah here are a couple of examples of some solid blocks. Both are from the right wing. The first he’s a little slow to get inside but sustains and keeps his feet moving. The second he shows better quickness and flips his hips to get inside and wall off the blocker.

Vs Colorado from the Y position on the right. He release into the flat on a run/pass option and after seeing it’s a run turns to square up the DB and drive him downfield.

Vs Colorado, from the right wing he pulls left with the RG. He kicks out the LB and with the RB breaking out I like the effort here to get in front to try and get a block

Vs UCLA from the Y position on the right it’s a down block good push to the inside on the DE to open up a big gap.

As a Pass Blocker there is some work to be done.  The effort and hands are there but he needs to work on his footwork to mirror defenders, drop his hips to so he doesn’t get out over his toes and add to his core strength.  He can get twisted above the waist by defenders causing him to get off balance.

Vs Clemson, on the right wing it’s not the prettiest pass block but it’s effective and like the ability to sustain the block

Wood also showed many other talents in this college years.  I have no direct knowledge but he seems like the type of player that would volunteer and/or do whatever was asked by his coaches. For example:

Your long snapper botches a couple of snaps. What do we do, Coach? “Wood, get in there and long snap.”

We need to run a Big Ben-like pooch punt. “Wood, get in there and punt it.”

Coach we need someone to play defensive end in the bowl game. “Wood, go play DE for us, will ya?”

Overall, Wood is a strong, physical run blocking TE on a team that needs a blocking TE. I think his use in the passing game would be limited to primarily check down stuff due to his lack of quickness but he can be snuck into deeper routes.  I got a Matt Spaeth vibe about him but with better hands. There’s work to be done as blocker but he has a good base of skills and I like the effort to finish his blocks. Having a skill like long snapping gives him even more value. I wouldn’t be surprised if he made a run at the #3 TE spot.

Chance of Making the Team: 5%