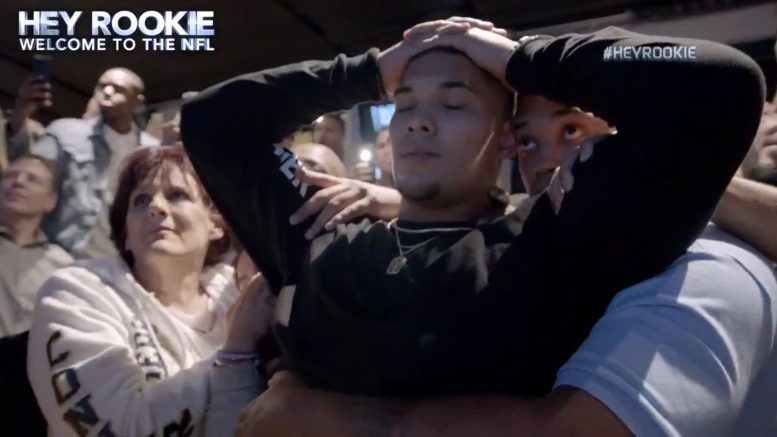 As we prepare for yet another installment of the NFL Draft, I feel it would be useful to provide a reminder for just how monumental and life-changing the moment of being drafted can be for hundreds of players over the course of the next several days.

And I can’t think of any better example than to share this video of Pittsburgh Steelers running back James Conner, which follows his draft experience from the 101st pick in the third round of the 2017 NFL Draft through to Arthur Moats calling out his name at 105th overall.

The wait to get drafted was long and stressful for @JamesConner_, but it all paid off in the end.#HeyRookie | @steelers pic.twitter.com/r9CbTTjFmd

It’s quite a remarkable few moments, spanning his close associates keeping his head up and noting that the Steelers are coming up, to the sudden phone call from Head Coach Mike Tomlin and the very emotional moments that he shares with the people close to him during the call and when his name was announced.

It’s an incomparable moment because it is pregnant with so much potential. It starts with some guaranteed money, for one thing, in the form of a signing bonus, but it is an entire new world of opportunities, and in Conner’s case specifically, he has already emerged as a Pro Bowl-level full-time starting running back entering his third season, after which he likely will receive a very lucrative contract that will set his family up for life if used responsibly.

Hundreds of lives will be changed directly over the course of the weekend, and by extension hundreds or perhaps even thousands more indirectly their relationships with these drafted players. But it’s about so much more than money, and financial security.

Just watch the Conner video and it should tell you everything you need to know about how big a moment it is for many of these players to be drafted, especially those who have overcome a lot in their lives to get where they are.

Conner is a player who literally penned an article heading into the 2017 NFL Draft in which he devoted himself to not being known as the football player who had cancer. Even during his ascension last season, they still talked frequently about his ‘back story’ as a cancer survivor, but as he continues to develop, it will merely be a footnote of a great career.

Of course, not every story is just like Conner’s. That he was drafted by the Steelers, for example, is a major part of that tale, and I think we all know that not everybody gets the opportunity to be drafted by the team they were hoping for.

But as you watch the draft over the weekend, just keep in mind what is going through the minds of these players today, the end of a long, long journey that is merely the first step on an even longer path.