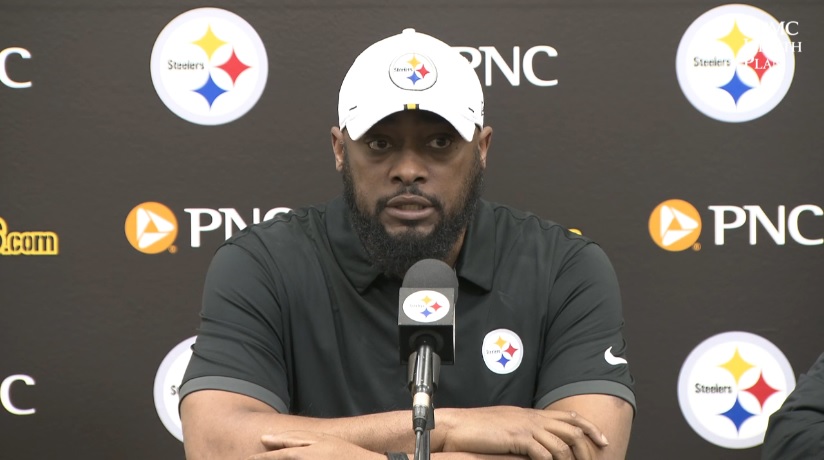 While the Pittsburgh Steelers had quite arguable the best pair of starting wide receivers in the NFL last season—it helps when they both make the Pro Bowl—the departure of Antonio Brown this offseason throws the unit a major curveball. So far, the team has only replaced his productivity with Donte Moncrief in free agency. In spite of that, they are not concerned with where the position stands heading into the 2019 NFL Draft.

“I’m comfortable with the guys that we have in the room at this juncture, but my comfort is not indicative of how it’s going to play out”, Head Coach Mike Tomlin said earlier today during his pre-draft press conference when he was asked about his feelings if the draft board doesn’t break in a way that puts them in a position to add a wide receiver early on.

“We’ve got some guys that need to be guys that are ascending, specifically James Washington”, he noted. “But you know the climate that we create for all second-year players. We had similar discussions about James Conner a year ago. We expect great things from James Washington among others and we’re excited about watching those guys stand and deliver”.

Washington was a second-round draft pick last year who had a disappointing rookie season. After showing glimpses of what he is capable of doing in the preseason, making a couple of standout contested catches in the end zone, he was fairly quiet for most of the year before making a couple of plays late in the process. He finished with just 16 receptions for 217 yards and a touchdown.

Still, the Steelers’ tracks record at wide receiver has been better than most over the course of the past decade, starting with the selection of Mike Wallace in 2009. The duo of Tomlin and General Manager Kevin Colbert have drafted four Pro Bowlers at the position, with Wallace and Brown followed by Emmanuel Sanders (making the Pro Bowl with the Denver Broncos) and obviously most recently JuJu Smith-Schuster, a 2017 second-round pick.

The common denominator for much of that, however, is clear to Colbert, and that is that they had the opportunity to play with a Hall of Fame quarterback. “We’ve had some good fortune with receivers.”, he said “It’s really no different than [how] we evaluate any other position. I do like to mention that they play with a Hall of Fame-capable quarterback. So I think that doesn’t hurt our receivers as they continue to develop”.

That Hall of Fame quarterback of course would be Ben Roethlisberger, heading into his 16th season this year, and about to work with among the youngest wide receiver rooms that he has ever had, with the possibility of it getting even younger later this week in the draft.

Of course some selections work better than others. More recent mid-round selections that had some success but ultimately did not live up to the team’s top standards include Markus Wheaton, Martavis Bryant, and Sammie Coates.