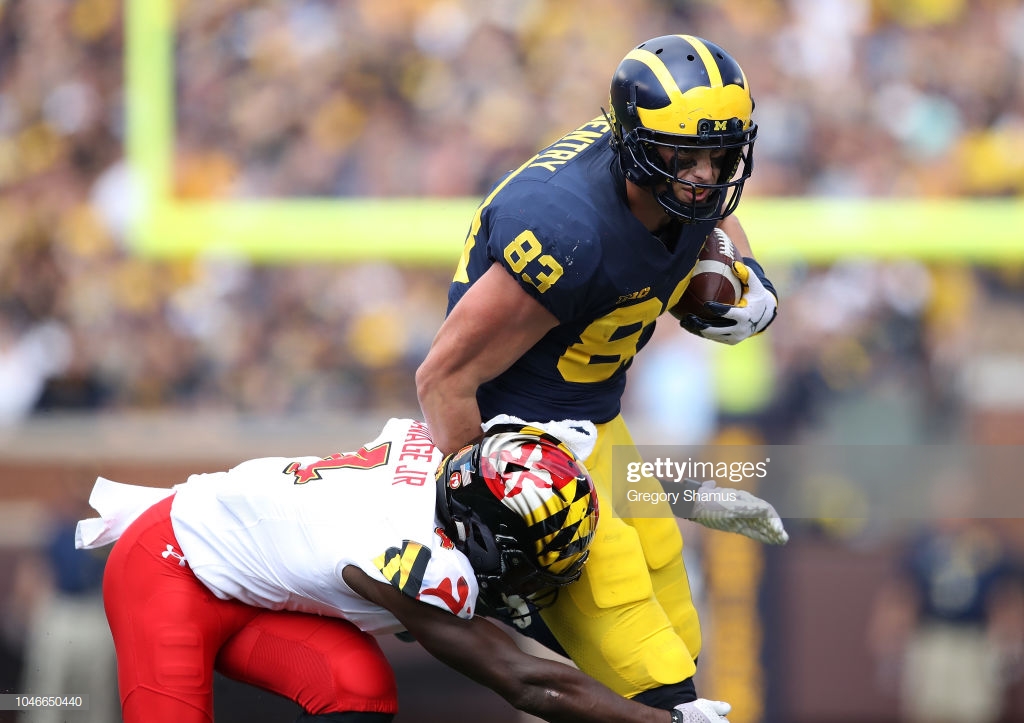 Many will need to look up at tight end Zach Gentry when speaking to him but despite standing at 6’8, Gentry does not look down upon others. The Michigan tight end is incredibly honest and humble. A former quarterback, Gentry made the switch to tight end before the 2017 season. With only two years playing the position, it would be right to assume that the new Pittsburgh Steelers tight end is still very raw technically, especially as a blocker.

Though Gentry does not hide from the fact, instead he is open and honest with his play. At this year’s NFL Combine, he was asked about his blocking and if it was an issue for teams during the interview process and he offered a very candid answer.

“They throw on the tape, and they’re able to see, I think most of my problems in the blocking area are small mechanical raw things that I need to clean up. All of the teams have acknowledged there’s a good deal of physicality. I’m not afraid of the contact and to throw my body in there. It’s more so just kind of figuring out the footwork.”

Next, the pundits questioned Gentry’s decision to leave school early but the tight end did not have any time to dwell on the past.

“I felt like I was personally mature enough, physically and mentally to handle the transition. It was a tough decision obviously. I just felt I was ready physically, mentally, I was ready to move on. The decision’s been made. What’s done is done. I’m happy with it,” Gentry told reporters at the NFL Combine.

Gentry is certainly ready to handle the transition on a mental level as he shows maturity beyond his years when speaking to reporters. While he is also physically mature enough to endure the NFL schedule, Gentry is fully aware that he needs some polish but he is eager to receive it. In an interview with Draft Wire the Steelers’ tight end speaks with confidence that with some polish, he can improve and become a playmaker for his team.

“I’m just a playmaker. There’s some small things that I need to improve upon in my game but I think NFL coaching will benefit me and I’ll be able to pick things up and improve rather quickly. I’m excited to keep getting better. I’m looking forward to making some big plays for my team. I can catch the ball in traffic and do everything they need me to do.”

While Gentry certainly is not a finished on-field product by any means, teams like the Steelers must have respected his honesty and commitment to improving. Combine that with an impeccable off field persona and it is easy to see why the Steelers chose to select Gentry in this year’s NFL draft.

“Off the field, I’m somebody who is going to do everything right — never miss a meeting, never miss a lift, never cause any issues. I think I do a good job of making the contested catch. I’m not afraid to throw my face in there and block. I’m working on being a complete tight end,” Gentry says.