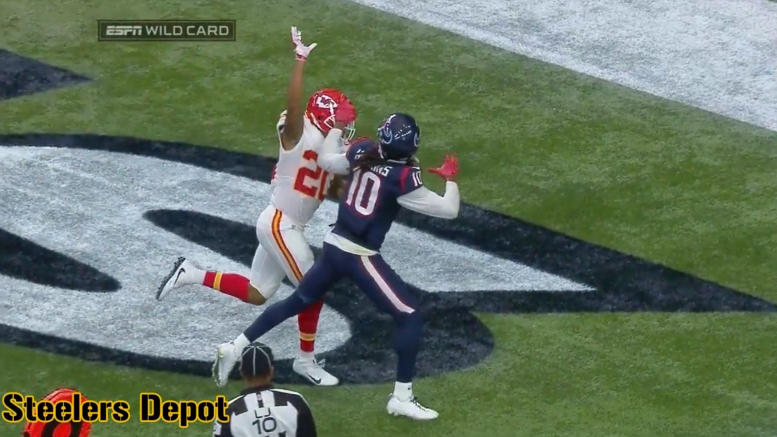 The Pittsburgh Steelers liked Steven Nelson as he was coming out of the draft in 2015. Nevertheless, they passed on him to select Senquez Golson in the second round. The Kansas City Chiefs liked him too, and they ended up adding him to their roster late in the third round.

Nevertheless, they were reluctant to play him, which many blamed on then-defensive coordinator Bob Sutton, who was said to have an affinity for veterans over younger, unproven players, which surely sounded familiar to you kind folks who have been following the Steelers for years.

So late in his rookie season, he took matters into his own hands when the opportunity presented itself, as he recounted on Fair Game with Kristine Leahy.

“I didn’t play my rookie year—majority special teams—so we get to one of the most important games in my career [against the Houston Texans in the postseason]. Marcus Peters, that’s my guy, his shoe blows out in like a critical part of the game”, he said.

“They’re on the 10-yard line, they’re about to score. And DeAndre Hopkins is amazing at this point in his career. Marcus Peters sprints off the field and the coaches are looking for somebody to step up behind Peters”.

“I’m just right there, young me”, he said. “They’re not yelling for me. I’m young. I used to always stand by my coach because I always had hopes of going in. So I’m like, ‘okay, nobody’s gonna run out there’, so I just sprint out there”.

Pretty bold of a rookie to take the initiative like that, but it paid off. This occurred in the middle of the second quarter following a 49-yard run by Alfred Blue, though the Chiefs held a 13-0 lead at the time and ended up winning 30-0.

After another carry for eight yards put the Texans on the five-yard line, Brian Hoyer looked for Hopkins with Nelson in coverage, but the then-rookie had good position on the play even though the ball was overthrown.

And so that was the story of his two-play cameo replacing Peters, who was also a rookie that year, in the starting lineup for the Chiefs in what was, before last season, literally their only playoff victory since the 1993 season.

He would be a starter last season the next time they won a postseason game, defeating the Indianapolis Colts in a blowout, 31-13. That game, he recorded two tackles and a pass defensed under his traditional stat line, but he was also credited with giving up three receptions for 54 yards, including a touchdown.

In 2019, he will form a starting duo with Joe Haden in the most expensive cornerback group the Steelers have ever had, with both of them making over $8 million per season. One thing we’ve learned is that he doesn’t lack for assertiveness or confidence.