Kevin Colbert made plenty of stops in Texas over the last month. We already knew he attended Texas and Texas A&M’s Pro Days. But there was a third stop, perhaps the most surprising one. A reader passed along this video to him, showing Colbert attending this year’s Houston Pro Day. Here’s a screengrab of Colbert at the workout. 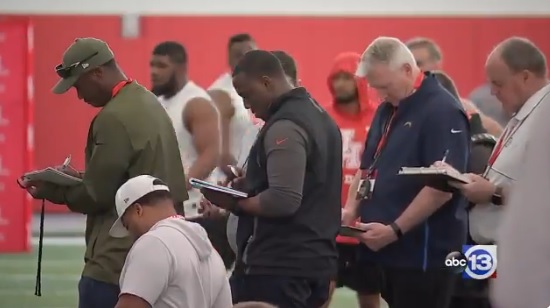 Ed Oliver is of course the biggest name, who crushed his workout with an insane 4.22 short shuttle and 4.73 40 time. With such a strong workout coupled with dominant college production, he’s likely to go within the top ten picks, putting him out of Pittsburgh’s reach.

Cornerback Isaiah Johnson is a long, athletic corner in the mold of who the team has targeted in the past. Standing in at 6’2, 208, he ran a 4.4 flat at the Combine with a 36.5 inch vertical and 11’1″ broad. He picked off four total passes the last two seasons as a Cougar and projected to go somewhere early on Day Three. A receiver early in his college career, he draws some obvious comparisons to Brian Allen.

Emeke Egbule is a potential Day Three sleeper at linebacker. The production isn’t gaudy, 162 career tackles, 13 TFL, and five sacks, he’s a bigger body at 6’2 245 while still showing a decent level of athleticism. At the Combine, he ran a 4.65 though struggled in the agility drills (4.38 short shuttle, 7.38 three cone). He reportedly improved the latter to a 7.09 mark at his Pro Day. He was one of six linebackers to check every box of our “what they look for” study.

For context, Colbert was already in the area for the workout. He attended the other two Texas Pro Days the previous two days so by no means did he go out of his way to travel to Houston and it appears to be the final stop on his Pro Day tour. Still, this is the first time in awhile he’s attended a non-Power 5 school. In fact, I think the last time he did was in 2016 when he was again at Houston to look at CB William Jackson III. As you probably know, the Steelers were going to select Jackson until the Cincinnati Bengals took him one pick earlier. Pittsburgh drafted Artie Burns instead.

It marks the 10th Pro Day he attended in 2019. Earlier today, we noted he was in fact at Michigan State. Our full, updated Pro Day tracker can be found here.