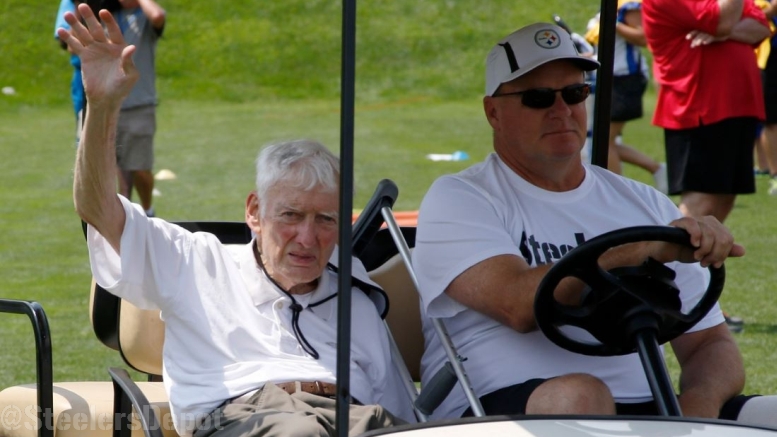 While it would be disingenuous to suggest that the Pittsburgh Steelers have never had tumultuous player relations before, one would be hard-pressed to find direct comparisons to what we’ve seen with the situations between the team and former players Le’Veon Bell and Antonio Brown over the course of the past two years.

Of course, there have been plenty of instances of players holding out, even Hines Ward. And there was that time that Mel Blount literally sued Chuck Noll for defamation. Things have certainly happened in the past. Nothing will ever be perfect. But did these two recent incidents have to play out as they did?

Jim Trotter wrote yesterday that he has been told by sources both within and outside the organization that they don’t think that would have been the case.

“There are some who believe the Bell and Brown situations never would have gotten to red-alert status if Dan Rooney had been around”, he wrote in a more broad-range article. “These same people contend that Art II, who declined to comment for this story, is more hard-line in contract matters. If true, that is a significant change in culture”.

Dan Rooney passed away two years ago, of course. While he had stepped down as team president over a decade ago, with his son, Art Rooney II, running day-to-day operations, he remained a frequent presence both socially and in business with the team up to his death after his days as an ambassador under President Barack Obama.

“Multiple people, both within and outside of the team, who are familiar with the inner-workings of the Steelers organization contend privately that the change in leadership two years ago, with Art Rooney II taking over after the death of his father, Dan Rooney, affected how business is done”, Trotter wrote.

Personally, I’m not sure how true that is, at least from the perspective of the contracts that actually get finalized. And Dan Rooney was still around when they strongly suggested to Troy Polamalu that he ought to retire, which left some bad blood between the organization and one of the greatest to ever play for them.

But it’s undeniable that Art Rooney II is not his father. Art cut his teeth in the business world when he was away from the organization. Dan’s life had always been football, faith, and family. That’s not to say that he wasn’t a shrewd businessman, but perhaps his approach was not so business-like.

Many fighting against this narrative point to Ryan Shazier, whom the Steelers retain under contract as he continues to rehab from a severe spinal injury suffered a year and a half ago that has put his playing career on hold indefinitely.

I don’t have enough inside information to make some sort of educated guess here about how true this sentiment is, and I’m not going to, either. It doesn’t feel as though things have changed significantly, but there was also only one Dan Rooney (actually, there are many, but you know what I mean).