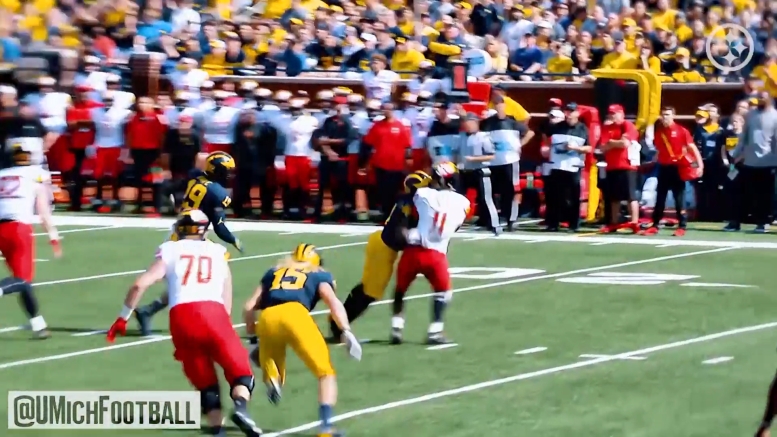 The Pittsburgh Steelers rated Devin Bush as one of the special players coming out in the 2019 NFL Draft class, which is what tipped the scales for them to go up and get him, trading a second-round pick in 2019 and a third-round pick next year to move from 20th to 10th to get the Michigan inside linebacker.

Bush’s defining trait is his sheer speed and his ability to go sideline to sideline, a presence in the middle of the defense that the Steelers have lacked since Ryan Shazier was injured in December of 2017. But if you ask the man who is going to get the opportunity to coach Bush, that is not quite the quality he is most attracted to.

When asked about what he liked about the team’s first-round pick, inside linebackers coach Jerry Olsavsky said, “just his speed, 4.4 guy. He really has really good late speed”. But he liked something a little more specific than just his speed. “He runs all the way through the sideline. He’s not sideline-to-sideline. He runs through people. He can really close when he’s going to make a tackle. That’s an added trait. It’s different than just speed. When you want to run through the guy, that’s really attractive”.

So in other words, he’s not just going to get to the ball. He’s going to go through the ball. Sounds a lot like Shazier, after all, who developed a penchant for jarring the ball loose. The difference is, Shazier was already producing those fumbles in college, while Bush had only one.

The defense hasn’t necessarily lacked for hard hitters. You had better not suggest that in the presence of Vince Williams, for example. Cameron Heyward and Stephon Tuitt along the defensive line can also lay down the law.

But none of them can do so with such velocity the way Shazier did, and that is the same sort of presence the organization is hoping Bush can bring back to the defense. It really adds another dimension that cannot be replicated without the physical traits and the mental makeup to be that player. Bush has both the physical and mental character to be that battering ram.

Of course that speed isn’t just for laying the wood. It’s also for getting to the ball in coverage before the intended target does. That is an area in which Shazier was really beginning to distinguish himself over the course of his final two seasons of play leading up to his injury.

Bush has strong coverage skills, but he only had one interception in college. That was also true of Shazier, however, so we know that can be developed. The first step is having the range, and next comes getting yourself in the right places to make plays. The finishing touch is finishing those plays.

That’s yet another thing this defense is lacking, a finisher who can make the splash plays that change the course of a game. We can keep harping on it, but that’s what Shazier was. That’s what Bush needs to be. That’s why this move was made.