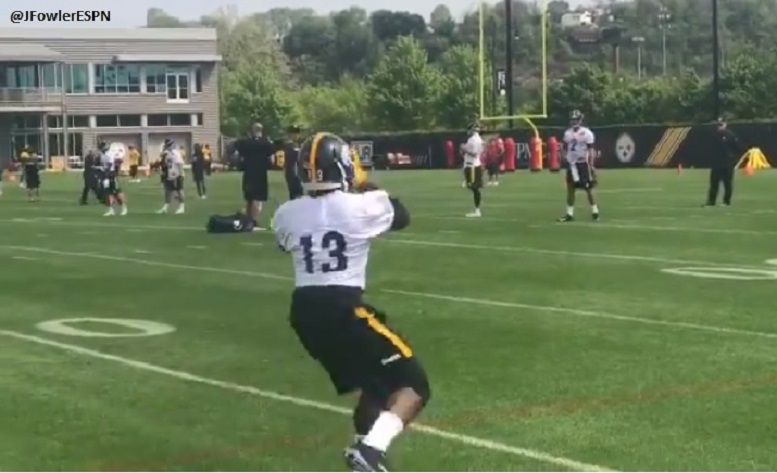 It’s rare that it ends up working out that way, but last season during the 2018 NFL Draft, the Pittsburgh Steelers had the opportunity to reunite two college teammates on their roster in Oklahoma State’s wide receiver James Washington, selected in the second round, and then followed by the addition of quarterback Mason Rudolph in the third round.

The two entered the program together and spent most of their four years starting alongside one another, increasingly putting up big numbers to the point where both of them were regarded as among the better prospects at their respective positions coming out of college a year ago.

One might say that neither of them had the rookie season that they were hoping for. But they can spend the offseason helping each other reach their goals for 2019 and getting better by calling upon their tight bond and on-field chemistry.

Washington spoke to Missi Matthews recently for the team’s website in a sit-down interview in which he discussed some of the nuances of his rookie season and how he was looking ahead to next year. Regarding his immediate plans, he said, “this offseason, maybe calling up Mason and doing some stuff together. The majority that and just talking ball”.

The fact that they were coming out together was far from lost on the scouting community. They even did a segment or two on television together in the pre-draft process, talking about their journey together leading up to the life-changing moment of entering into the fraternity of the NFL.

That fact was not lost on the Steelers, either, who ended up scouting them together as they began their process of finding their next quarterback following Ben Roethlisberger. Though they selected him in the third round, they only did so because they viewed him as a first-round prospect and could not pass on the opportunity to get him at that value even though they already had three quarterbacks.

But Rudolph spent his rookie season on the bench behind Joshua Dobbs, who ascended into the backup role over Landry Jones, who was released. Meanwhile, Washington played extensively and spent the majority of the season as the team’s primary number three receiver, but he was sparsely-targeted and struggled on the field to be on the same page with Roethlisberger. Both of them are determined to grow in 2019.

“He always said ‘I’m just a phone call away. You need anything, just call me’”, Washington said of Rudolph. “We worked a lot trying to get our football IQ up”. I have no doubt that they will be getting together this offseason. It will be interesting to hear come training camp time how that investment paid off leading into year two for the pair.