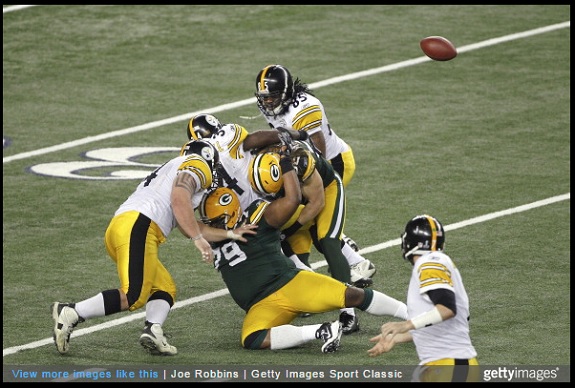 Another former Pittsburgh Steelers running back has made accusations against quarterback Ben Roethlisberger and this time they’re a lot more serious than accusing him of fumbling during a game on purpose.

During a long Twitter rant Wednesday night in which he was attempting to defend former Steelers wide receiver Antonio Brown from criticism, Rashard Mendenhall, who played running back for the Steelers from 2008-2012, labeled Roethlisberger as a “racist.”

You can see the string of tweets below in chronological order.

I know he seems outta pocket right now, but I seriously feel for @AB84.

As a black athlete in this country, you can literally lay your body out and give your entire being for a higher cause, the greater good of a TEAM.

And when you face the firing-squad, for something not entirely your own doing, depending on your position and skin-tone, the “team” may very-well leave your ass out to dry.

Think about what it would take to render @AB84, the GREATEST COMPETITOR of our generation, incapable of showing up to play in his last game.

To boil that down to @AB84 being a “diva” “selfish” “quitter” couldn’t possibly explain the MAN who for nearly a decade provided professional excellence to the city of Pittsburgh.

By no stretch am I saying @AB84’s been without guilt this off-season. I just hope to see more compassion and examination, for a guy who gave everything he had until he couldn’t bring himself to do it, for even one more game…

Alright, I’ll end the mystery… B’s racist and @AB84’s black. He had to catch balls from a racist quarterback. Every honest player knows it, it’s not a big deal. He was just supposed to take his lickings and move on, like a slave for real. https://t.co/ubI39UDauY

Roughly three hours after that first Twitter rant, Mendenhall then backpedaled on his comment about Roethlisberger being a “racist” in an answer he gave to a question.

Clearly it’s no fun, when EVERYONE’s the accused…

Please allow the dialogue in sports to be equal. Why’s it so easy to shoot at one player, but not the other?

B’s not racist. Just like AB’s not a dirtbag.#letsbefair

Why did Mendenhall wait so many hours to essentially recant what he said about Roethlisberger? That was a very serious accusation even if truly didn’t mean it and that it was used to make some sort of point. Also, why did it take so many years for him to finally come forward with such a serious accusation and why did he only dedicate one Tweet’s worth of characters to it? If attempting to make some sort of point, Mendenhall did a very poor job and especially when you consider that he waited multiple hours before essentially saying that Roethlisberger isn’t a racist.

What everyone has known for quite a while now is that Mendenhall is one of those deep thinkers and his previous online rants have left many scratching their heads after reading them.

PSA. Contact me or @MaurkicePouncey or anyone else that you feel comfortable with about anything else next time. I passed this through a few guys still in the locker room and they are ok with this. pic.twitter.com/4xBpm9JWZH

“Moving forward … Any former player of affiliate of the Steelers who has an issue with anyone still in the locker room, please contact me of Maurkice Pouncey or anyone else you feel you can talk to. Whoever you have an issue with, we will get your their number so you can address them. I PROMISE.”

“These media takes might give y’all good traffic on your social media outlets but the guys still in that locker room, who y’all still know personally have to answer for those comments. Call them what you want, but call them personally and tell THEM. Defend who you want to defend but you don’t have to mention the team at all.”

“Whether you have a ring or played for one year … ENOUGH … CHILL. Most players at one point in their life want to take their kids back to the place where they once played, don’t burn too many bridges. It’s a long history or brotherhood more than anything, BUSINESS is one thing but let’s keep it at a minimum for the guys who have to answer for those comments going forward.”

Mendenhall unfortunately is best known to Pittsburgh sports fans for fumbling in the fourth quarter of the Steelers Super Bowl XLV loss to the Green Bay Packers. Originally selected in the first-round of the 2008 NFL Draft by the Steelers out of Illinois, Mendenhall played his entire career in Pittsburgh with Roethlisberger as his quarterback. Three of those seasons included him being Brown’s teammate. He then went on to play one final season with the Arizona Cardinals.

Mendenhall, in case you forgot was suspended for one game during the 2012 season for conduct detrimental to the team due to him failing to show up for a Week 14 game at Heinz Field against the San Diego Chargers after being informed hat he wouldn’t dress for that contest.

Since the 2018 season ended, Roethlisberger has been accused of not only having an ownership mentality by Brown, but being a player who demand to win his way and his way only, according to former running back Le’Veon Bell.

“Ben wants to win — but Ben wants to win his way, and that’s tough to play with,” Bell told Sports Illustrated several weeks ago. “Ben won a Super Bowl, but he won when he was younger. Now he’s at this stage where he tries to control everything, and (the team) let him get there.”

Another former Steelers running back, Josh Harris, who only spent just a few weeks on the team’s roster in 2014, accused Roethlisberger this offseason of fumbling on purpose late in a Week 17 game against the Cincinnati Bengals that season in retaliation against then-offensive coordinator Todd Haley not calling for a kneel-down play.

In light of all these accusations against Roethlisberger, the Steelers quarterback has remained silent and he’ll likely continue doing just that until he speaks to the media for the first time when the team’s 2019 OTA practices get underway in May.