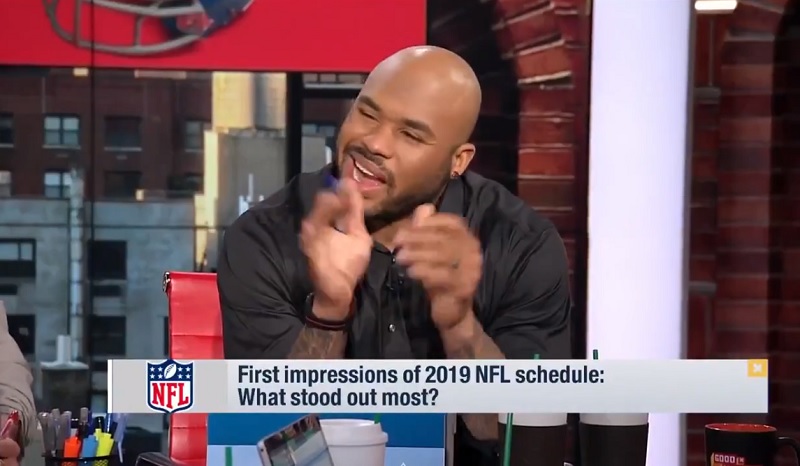 The 2019 NFL schedule was released Wednesday night and while most people view that event as merely attaching dates and times to upcoming opponents that have long been known, one former longtime NFL player made it known on Thursday that an NFL schedule can be a big deal to some players depending on how it is laid out.

Former NFL wide receiver Steve Smith Sr., who played 16 seasons in the NFL with the Carolina Panthers and Baltimore Ravens talked Thursday morning on ‘GMFB’ on the NFL Network about how team schedules can sometimes have an impact on certain players around the league.

How can a team's schedule affect the players?

Steve Smith says it's tougher than you think 👇

“When you look at those schedules. I used to think as a player, I was like, ah, it’s not a big deal, you just play,” Smith said. “Whatever the schedule gives you, you just go out there and play. And then when I was with Baltimore, we did a like a two and a half, three week, road trip on the west coast. We went to Denver, then we played in Oakland. Living out of a hotel in different cities is a big deal. You get uncomfortable. You don’t have anything, you have nothing that is normal. It is a daunting task and it requires a lot for the team to organize breakfast, lunch and dinner. You have all this stuff that you have to do. You have to pack a bag.”

In case you don’t remember, when Smith was in his second season with the Ravens in 2015, Baltimore had to play the Denver Broncos on the road in Week 1 that year and the Oakland Raiders on the road in Week 2. Way ahead of those games taking place, Ravens head coach John Harbaugh made the decision to keep his team on the West Coast between those two road games rather than travel back and forth to the East Coast. The Ravens ultimately lost those two road games to the Broncos and Raiders and even returned home and lost their home opener against the Cincinnati Bengals in Week 3.

If that failed West Coast swing wasn’t bad enough for the Ravens, they repeated the process between Weeks 6 and 7 of the 2015 regular season for their back-to-back road games against the San Francisco 49ers and the Arizona Cardinals. They once again lost both of those contests despite staying out on the West Coast again between contests and thus entered their Week 8 home game against the San Diego Chargers with a 1-6 record. Strangely enough, their lone win in those first seven games came at home against the Pittsburgh Steelers.

“It does affect your play,” Smith recalled Thursday morning. “You get worn down. You’re on an airplane, you don’t have some of the things.”

Smith went on to describe that road process like one being forced to cook Thanksgiving dinner on the road and not in their own home.

“So, all of that stuff has a big impact and I didn’t believe it, but it does,” Smith said.

Smith then went on to describe how some players around the league are creatures of habit when it comes to their in-season week-to-week preparations for games and he even used former Steelers wide receiver Antonio Brown as an example for that.

“We have guys on the show all the time, they talk about the things that they do. Antonio Brown is notorious for having the chef, the trainer, all that stuff,” Smith said. “Now you’re on the road. One week you’re in Denver, the next week you’re in Oakland, then you’re in London. I mean, where do you get all of the things that you’re expected to perform and be ready? Because the person in London is not going to do it the same way in Oakland. The person in Oakland is not going to do it in Denver, and then the person in Denver, and all three, will not do it the same way that you are accustomed to using body maintenance.”

Smith using the Steelers former wide receiver as an example is interesting because Brown’s new team, the Raiders, will play on the road three consecutive weeks in 2019 starting in Week 3 with a road game against the Minnesota Vikings. In Week 4, the Raiders will play the Indianapolis Colts on the road and that game will be followed by a Week 5 game in London against the Chicago Bears. While the Raiders will have their bye after returning home from London, they’ll be back on the road again in Weeks 7 and 8 for contests against the Green Bay Packers and Houston Texans. I bet Brown is not looking forward to the first 8 weeks of the Raiders 2019 regular season right now.

When you look at the Steelers 2019 schedule, while two of their first three games are on the road against the New England Patriots and the 49ers, they will get an extra day of rest ahead of their Week 4 Monday night home game against the Bengals. Additionally, the Steelers bye week this season follows their Week 6 road game against the Los Angeles Chargers. In total, six of the Steelers first nine games of the 2019 regular season will be at home with two of those three road games being on the West Coast.

While the first half of the Steelers 2019 regular season seems somewhat favorable from a home and away standpoint, the team’s final seven games include them playing on the road five times. In fact, three of the Steelers final four regular season games in 2019 will be on the road with one of those away contests being against the Arizona Cardinals. That series of seven games also begins with back-to-back divisional road games against the Cleveland Browns and the Bengals.

If it’s of any consolation to any of you, in 2015, the last time the Steelers played the NFC West division during a regular season, they finished with a 10-6 record. That same season they opened up on the road against the Patriots and then played on the West Coast in Week 3 against the St. Louis Rams and again in Week 5 against the Chargers. They exited those first five games with a 3-2 record with two of those victories coming out West. That same 2015 regular season also included the Steelers playing four of their final six games on the road with the final two being away against the Ravens and Browns. They managed to go 4-2 in those final six regular season games with both losses being road defeats at the hands of the Seattle Seahawks and the Ravens.

With Smith now on record with all of what he said on Thursday about the schedule release and how it can impact certain players around the league, it will be interesting to see if a few veteran Steelers players are asked to respond to those remarks. Fortunately for the Steelers, their 2019 schedule doesn’t come close to comparing to the one Smith played with the Ravens in 2015 or the one Brown will play in 2019 with the Raiders.