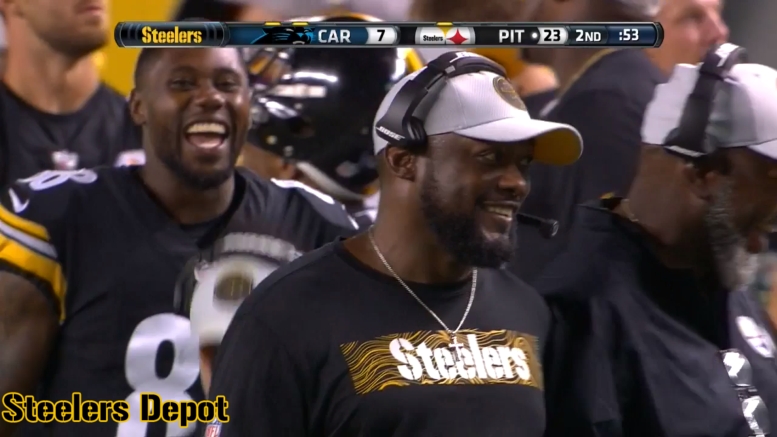 The question posed to him was how much responsibility falls on the shoulders of Steelers Head Coach Mike Tomlin for the team’s off-field headlines and assorted drama over the course of the past year and beyond. He assigned the veteran head coach precisely zero blame. As he explains:

“I blame zero on Mike Tomlin”, the former basketball player turned sports media commentator said. “No part, no form, nothing. The man has a job to do, and he understands it. If I’m gonna place blame or point it at somebody, I look at the Rooney family. Why do I say that? They have gone over Mike Tomlin and fully empowered Ben Roethlisberger”.

“If Ben Roethlisberger ultimately has a problem with Mike Tomlin, Mike Tomlin will no longer be employed”, he went on. “So you’ve got to pose to me and help me figure out what ultimately now can Mike Tomlin do? They run the Steelers like the NBA. The NBA is a player’s league where your best player trumps the coach, and now you’ve taken that mentality into football”.

Now, there are a lot of problems with his argument, one of them being the notion that the Rooneys and Tomlin don’t work closely together on decisions and generally defer to his decisions. When the team elected to move on from a couple of assistant coaches this offseason, Art Rooney II made it clear that it was Tomlin who made those decisions, for example.

Nevertheless, it is surely true that if it came between Tomlin and Roethlisberger, the franchise quarterback in the NFL is going to win out over the head coach in almost all cases, with perhaps very rare exceptions.

Insofar as Roethlisberger is a part of the Steelers’ problems, and I’m not necessarily going to pinpoint any one thing, it has been an organizational—really, a structural—decision to empower the franchise quarterback. That mechanism exists throughout the NFL and is not new. See Tom Brady.

When it comes to the Steelers’ drama, the fact of the matter is that there is enough of it to allow blame to go around all across the room. Nobody’s hands are entirely clean, at least regarding the primary actors.

But the key going forward, I think, is Roethlisberger, and his role in maintaining a healthy locker room through his leadership while not overstepping boundaries. Roethlisberger needs to be the player go-between for the front office and coaching staff while remaining a ‘teammate’, first and foremost.