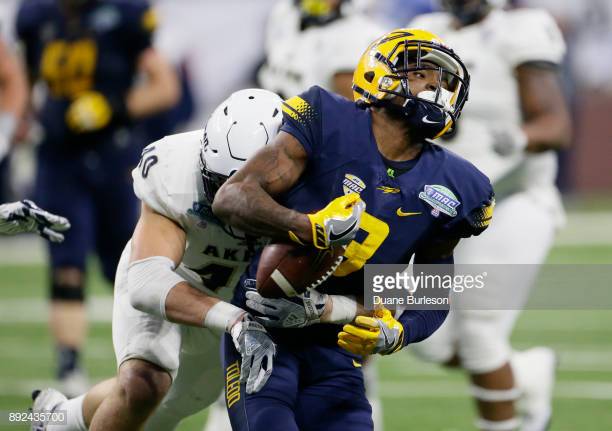 With seven defensive backs and seven wide receivers coming of the board in the second round when the Steelers were on the clock they did not hesitate. As soon as Arizona had made their selection at pick 65 the announcement came that the Steelers had already turned in their card.  Their choice was Toledo WR Dionte Johnson.

Wide receiver was a need and with names like Hakeem Butler, Emanuel Hall and Riley Ridley on the board they went for a selection we may not have expected this early.  We knew there was interest in the Toledo trio of receivers as the Steelers had sent receivers coach Darryl Drake and Special Team coordinator Danny Smith to Toledo’s pro day. Evidently they came away impressed.

Let’s see what people had to say about him:

Lance Zierlein from NFL.com said, “Despite a lack of desired size, Johnson might have the ability to play inside or outside thanks to his speed and ability to elude press from his release. He has basketball athleticism, but his routes will need more focus and less freestyle once he steps up in competition. The athleticism and quickness should allow for a wide range of usage on offense but his hands might always be a concern for him. He’s a little small and wasn’t as fast or quick at the combine as expected, so Day 3 in the draft is his likely landing spot as a WR3/WR4 talent.”

Steelers Depot’s Nick Farabaugh had him at #151 saying “Johnson is one of the best pure route runners in this class period. His foot speed and quickness in and out of breaks and the sharpness he has in his stems is fantastic for a guy who is graded this late, and he is a Day 3 steal, but his athletic testing dropped him like a log. I think he plays better on film, but that is certainly a bit of a concerning element to me. He also needs to expand his route tree, so I am not quite sure how easy the transition will be for him.”

One thing that was not a surprise is Pittsburgh drafting another player from the MAC conference.  Last year they took Chukwuma Okorafor from Western Michigan in the 3rd round, Keion Adams also from WMU in the 7th round in 2016, L.T Walton from Central Michigan in 2015 and by the way, way back in 2016, the took a WR out of Central Michigan named Antonio Brown.

From those listed above I think it would seem this is a reach for the Steelers. There were other receivers still available that had more attention in the draft process.

Overall: From what the consensus has indicated about Johnson this is a reach and fairly big one. I felt he would be a day three pick so hearing his name announced surprised me. Pittsburgh seems to do that to me annually. There was a need at WR and he can be used as a returner as well.  I’m going to give the staff the benefit of the doubt and expect good things from Johnson.