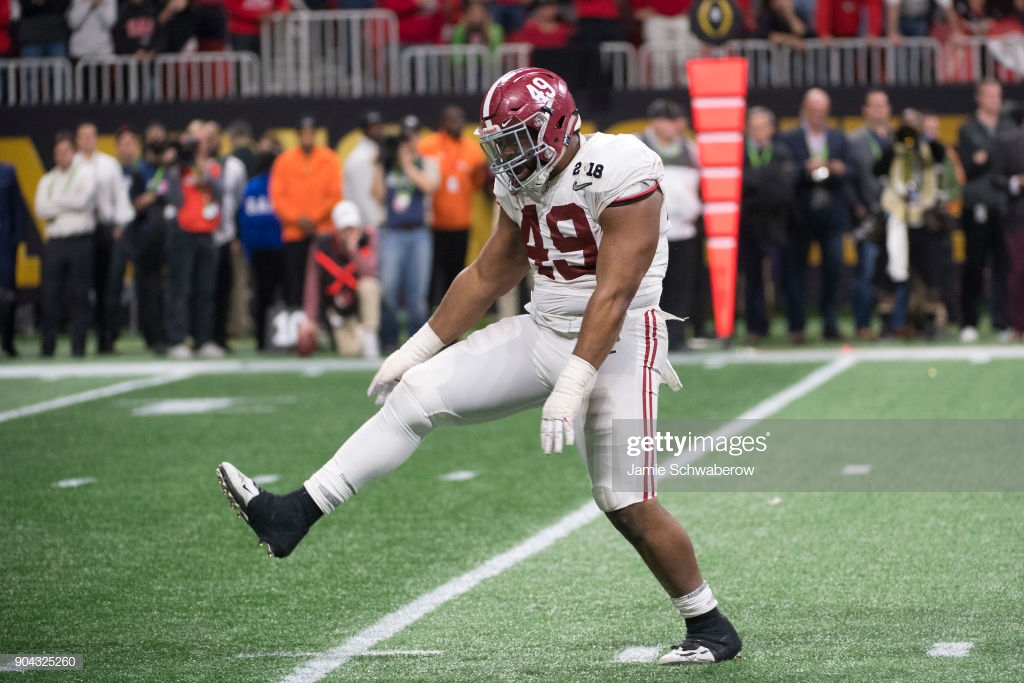 Defensive Line coach Karl Dunbar was brought in last year after spending the previous two years at Alabama in the same position. Prior to him joining the staff the last time the Steelers selected a player from Alabama was 1998 (Deshea Townsend).

In the 2018 draft the Steelers used a 7th round selection on Alabama DL Joshua Frazier. This year they used their second sixth round pick on Alabama DL Isaiah Buggs.

I think Coach Dunbar knows how to pound the table for his former players.

He played his first two collegiate years at Mississippi Gulf Coast Community College before joining the Crimson Tide. Last season Buggs had a bit of a breakout year with 13.5 tackles for a loss and 9.5 sacks. He has flexibility being used in different spots along the defensive line but with 31 ¼ inch arms he’ll like by slated to play inside and fight Dan McCullers to be the backup on the inside. He tested very poorly virtually across the board.

Lance Zierlein from NFL.com has him as a 4-5th rounds projection and says, “Base end in college who will be moving to defensive tackle on a full-time basis in the pros. Buggs has the body type, play strength and quickness to make a full-time transition inside as a one- or two-gapper, but he needs to play with more consistent resolve. He has some talent to win quickly as a rusher, but his testing numbers in quickness and explosiveness have been very poor and will likely cause him to drop.”

Nick Farabaugh ranked him number 155 in his Big Board, “Another name melted down by athletic testing, but the worst part is that Buggs has clear athletic limitations on tape. His burst and first step are just not there even with his good hand usage and clear repertoire that he wields. He clearly also simply does not have the plan before going into a play and simply hacks away when looking for a way to counter being locked up.”

Josh Carney in his profile for Steelers Depot had him as an early Day 3 pick and wrote, “Buggs is a fine player that would make a nice rotational piece on a defensive line, but he kind of got lost in the shuffle at Alabama on the same defensive line with Quinnen Williams and Raekwon Davis. Buggs will need to test really well at the Combine to put some of the athleticism questions to rest, but he’s certainly going to be a piece to use in the NFL.”

Interestingly Buggs is currently listed as a defensive end on Steelers.com. Based on the comments above he’s better suited to play inside. Regardless of position, depth is need along the defensive line so he will have to fight with the likes of Lavon Hooks, Casey Sales, Conor Sheehy and Winston Craig to earn a spot on the roster.

Overall: Based on the projections above the expectation was that he would be taken earlier on day three. Therefore the thought is this is good value pick. A player from a power 5 conference with his former coach here to develop him is a good start. Let’s hope it works out better than it did with Frazier.