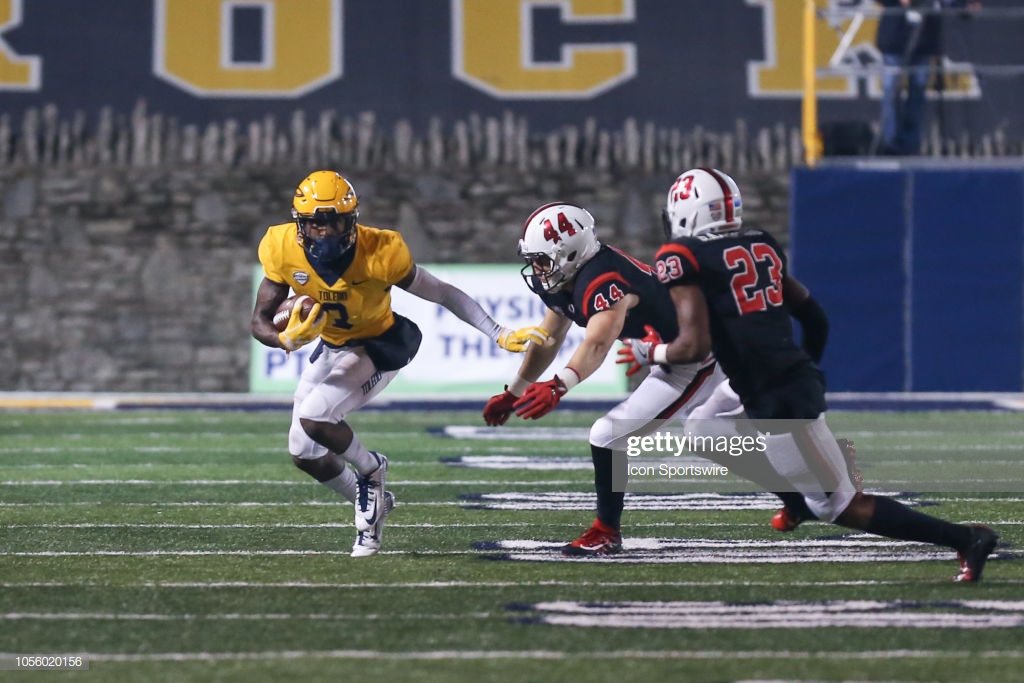 When the Pittsburgh Steelers lost a major asset this offseason after trading Antonio Brown to the Oakland Raiders in exchange for additional third- and fifth-round picks in the 2019 NFL Draft, they worked to replace him by signing Donte Moncrief in free agency and using that third-round pick to select a player that bears a lot of similarities to Brown coming out of college in Diontae Johnson.

Similar size, MAC player, similar separation ability, another returner candidate. Most will view him as a reach, and that he probably could have been had tomorrow, or at least with the second third-round pick. That won’t change anything, because he’s here now. And supposedly, that was not going to be the case anyway.

One of the flags on him is the fact that he timed just 4.53 in the 40-yard dash out of Toledo during the 2019 NFL Scouting Combine, which is certainly on the slow side for a smaller player such as himself. He posted a speed similar to Brown when he went in the sixth round, but obviously the slot receiver is much more valued today than it was nine years ago.

As he spoke to reporters earlier today, however, he noted that he doesn’t do any training for the 40-yard dash, which presumably most college prospects do. He admitted 4.53 is the fastest time he has ever posted, but that doesn’t matter because he has something more important than track speed. He has “football speed”. “Once I get the ball in my hands I’m way faster than what I ran in the 40”, he told reporters.

Credit the kid’s honesty. Said he doesn’t train for the 40 and the 4.53 he ran at the combine was the fastest he’s ever ran it. Said it doesn’t matter because he’s got “football speed.”

Johnson said he is faster than the 4.53 time he posted in the 40-yard dash at the NFL combine. “Once I get the ball in my hands I’m way faster than what I ran in the 40,” Johnson said.

Wide receivers coach Daryl Drake saw that football speed on tape, telling reporters about Johnson that they were looking for a “blazer”. He called him a “total package” player who is more than just “dynamic speed”.

More Drake: “We want that guy, that blazer but normally with that package of that dynamic speed, very seldom do you get the total package. This guy has ability to be a total package guy.”

Every little nuance in Johnson’s game is going to be broken down over the course of the next several months, be sure of that, but I wanted to note this little tidbit that he revealed about his timed speed, as I know it’s something that many people were pointing to as a reason they would want to avoid him.

There is plenty of time to sort everything out, but Johnson is obviously not a player that the Steelers will need to get on the field on offense in a major way right off the bat. They have JuJu Smith-Schuster as their top guy with Moncrief and second-year James Washington competing for the starting spot opposite him. they also retain Ryan Switzer and Eli Rogers in the slot.

Where he may contribute immediately is on special teams if he is given the opportunity to compete for the returner spot with Switzer, who returned both punts and kicks last season. Given that they drafted him as high as they did, with their second pick after Devin Bush 10th overall, though, one would have to think that they see something they can use sooner rather than later.