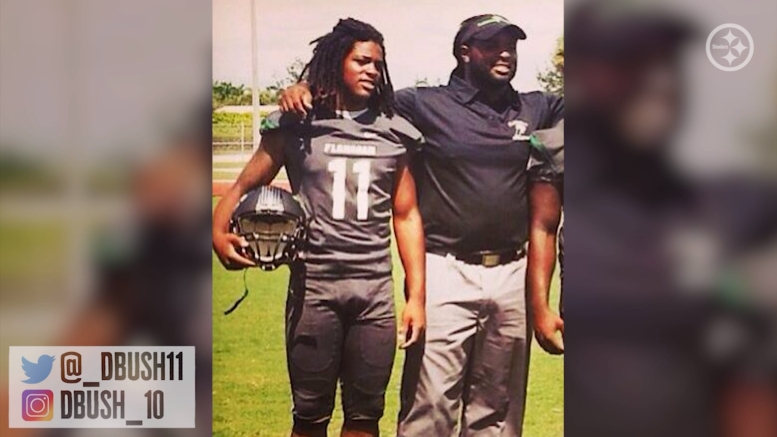 The Pittsburgh Steelers, without question, value football blood when it coincides with a strong evaluation. It’s not entirely by accident that their past three first-round picks come from a football lineage. T.J. Watt has two brothers in the NFL. Terrell Edmunds does too, and his father was a Pro Bowler. Now Devin Bush is yet another son of a first-round pick and Super Bowl champion, who bears his same name.

And it wasn’t long before he realized, at a young age, that he was his father’s son—for better and for worse. He got the genes, but also the expectations, and he told Missi Matthews in a sit-down interview for the team’s website in the past days that he felt the pressure that his name carried early on.

“I think when I first picked up a football, I kind of understood who my dad was and what he’d been through to get there, and I felt the expectations when I actually started playing organized football”, he said. “A lot of people recognized my father, and a lot of people looked at me as just being a shadow of him, so I definitely felt the pressure at a young age”.

I don’t want to get too deep into who Devin Bush, Sr. is, because I plan on talking about that in the near future, but he was a star defensive back for Florida State in college, selected 26th overall by the Atlanta Falcons in the 1995 NFL Draft. He would go on to have an eight-year career, largely as a starter, participating in two Super Bowls and winning one with the St. Louis Rams. He would record five tackles and a pass defensed for that defense against the Tennessee Titans.

Being the son of a talented football player certainly brings with it a certain level of expectations, even demands, if you similarly choose to follow the football path. Bush has talked about how it has been difficult at times, his father often serving as his coach and pushing him hard, not always understanding the reasoning behind it.

That doesn’t mean he wouldn’t change it for the world. It all helped him to get where he is now, a top-10 pick going to a strong organization in which he can serve as a cornerstone defender on an emerging defense that can help return them to the Super Bowl.

You surely saw the video of him hearing the messages from his family—his mother, his father, and his two younger sisters—and how close of a relationship they share. His father has obviously had a close bond with him in the football world, and he shared the advise that he gave him as he embarks upon the next chapter.

“’Just take it all in’”, his father told him. “’You were groomed to do this, you’re a professional now, handle yourself accordingly. There’s only so much more I can teach you. You learn by experience’”.

It might not be long before he gets a ton of experience. The Steelers’ last two first-round picks were wall-to-wall starters during their rookie seasons.

Bush only has to edge out 29-year-old free agent signing Mark Barron to work into the starting lineup. Given what they gave up to get him, the Steelers probably feel he has pretty good odds of winning a starting job sooner rather than later.