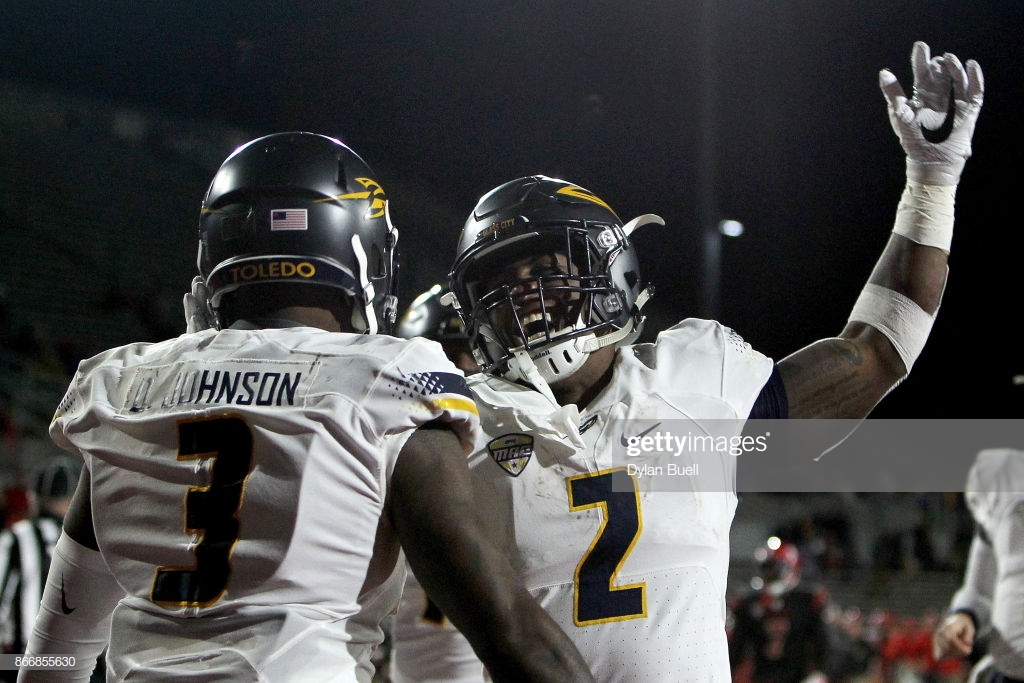 Toledo wide receiver Diontae Johnson really could be one of the more promising low risk, high reward receiving prospects in this year’s draft. He has experience playing outside and in the slot and also comes with the ability to help out on special teams as a return man. While he did not get as many touches as his stellar 2017 campaign (1278 receiving yards in 2017), he was able to showcase some stellar traits.

Johnson’s biggest strength is his quick release off the line of scrimmage. He does a good job at avoiding press coverage with his nimble and light feet. The Toledo receiver is able to keep cornerbacks off balance with varying releases off the line of scrimmage. On the play above, he takes a quick jab step outside, opening the cornerback’s hips, giving Johnson the inside release he desires. It is a textbook release, route and catch and something that will become very common in Johnson’s resume.

While Johnson excels at getting an inside release, he is also capable of getting the space required for an outside release as well. Here he is matched up with Miami cornerback Michael Jackson and again Johnson uses his quick feet to beat him off the line. Jackson’s hips are turned due to the release and at this point, it is a footrace to the finish. Johnson has a step on Jackson and that is all that he needs to make a great catch down the sideline. Besides his release, the Toledo wide receiver also shows consistent concentration and ability to track the ball in the air.

The biggest question Johnson is going to face at the next level is his ability to beat press coverage. Receivers his size (5’10, 183 lbs) are often gifted with athleticism but their biggest shortcoming are their abilities to handle press coverage. Most of them fail but most of them really do not come out of college with the release abilities that Johnson possesses. The Toledo receiver does have his troubles when cornerbacks are able to get their hands on him but that has not been frequently displayed on his tape as he is just too quick and slippery to jam. Watch the play above as Trajan Bandy tries to jam Johnson at the line but he cannot match the receiver’s quickness.

Now being 5’10, Johnson is not going to blow anyone away with his size, length or jump ball ability. Simply put, the road to being a successful 5’10 receiver (especially playing on the outside) is a tough one. The best receivers who have succeeded despite their height (Antonio Brown, Steve Smith Sr.) have one common trait they share – the ability to play bigger than their size. What this means is the ability to out jump or out battle cornerbacks at the point of the attack. Johnson also shows this trait quite often, out jumping cornerbacks, using all his frame and even being the target of a few fade passes in the end zone. While I have my doubts over Johnson’s ability to be a true vertical threat as his top speed is far from elite, his ability to contend and use all his frame is an intangible worth noticing.

While his release is NFL ready, Johnson’s actual route running still leaves some room for improvement. The Toledo wide receiver could be sharper at the breaks of his route as he does have a tendency to round off a significant portion of his routes. At other times, he lacks suddenness at the top of routes (such as hooks) which gives the opposing cornerback an easy chance to make a play on the ball.

Johnson’s biggest strength is one to fall in love with as his ability to quickly release off the line leaves some ceiling for him at the next level. The Toledo wide receiver is going to get drafted and given reps to prove his worth, as he can play outside or in the slot and comes with the biggest survival requirement for rookies – special teams ability. Though Johnson is not just a special teams’ body, he has legitimate return experience as both a kick and punt returner (four career return touchdowns). With legitimate hands, release, and YAC ability, there is a lot to be excited about when it comes to Johnson’s potential at the next level. With the right coaching, he could become a serviceable offensive weapon one day.