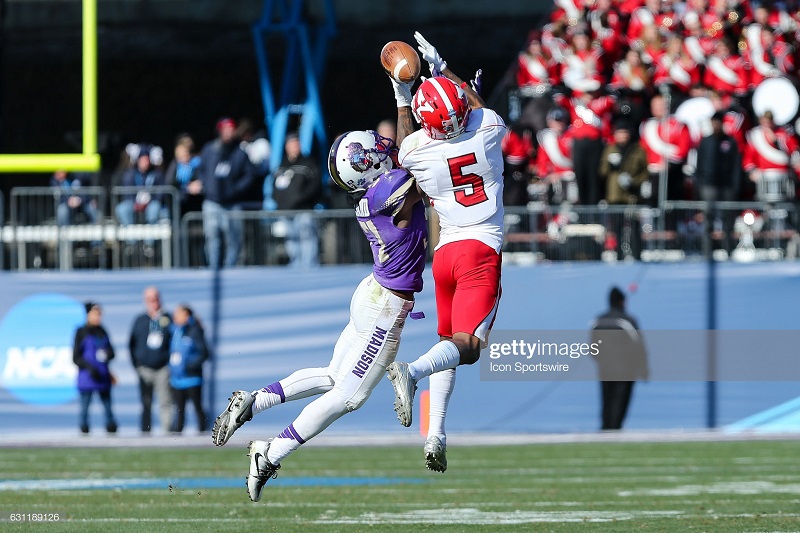 Eighty one combined interceptions and pass break ups in his career.  That’s going to draw some attention. Jimmy Moreland (#6) has earned plenty of accolades in his collegiate career including FCS champion in 2016 and invites to the East West Shrine Game and Senior Bowl this year.

Moreland was used primarily as the boundary corner but saw action on both sides of the field outside and in the slot. He often played in Press man coverage and displays a good jam at the LOS able to redirect WR’s and make them work to get into the routes. He shows the ability to flip his hips and run with receivers down field and good COD to mirror the cuts. When he jams he must stay square for when he opens too early to the inside the gives the WR a chance to open up space. In off Man coverage he shows a smooth pedal and keeps his eyes in the backfield but gives up to much space leaving underneath throws room to be completed. In Zone coverage he shows good route awareness in his zone whether in Cover 3 or in the short area underneath and understands the route combinations and breaks on the ball well. Pass interference was an issue in the first game I watched vs East Carolina where if I counted correctly he was called for 5 DPI. Long speed could be an issue seeing WR’s run away from him on deeper routes. When called upon to blitz or when jamming a receiver he doesn’t hide his poker hand well.  He gets antsy and up on his toes signaling he is coming.

At East Carolina he’s in the right slot and shows a very good jam staying in front of the WR and forcing him into the throwing lane leading to and INT and he finishes the play with a pancake block.

At East Carolina lined up wide right the footwork and hips are good and he’s in the hip pocket of the WR but he can’t make a play on the ball. An extra couple inches on his arms could’ve helped.

Vs South Dakota State split wide left off the ball. Good reaction and downhill acceleration to make the tackle on the WR screen.

Vs South Dakota State split wide left he gets beat off the LOS and recovers nicely to undercut the route and get a hand on the ball that still ends up being a catch.

Vs South Dakota State split wide left running with a post pattern with Jake Weineke (#19) who isn’t very fleet of foot and runs away from him at the end.

Vs South Dakota State split wide right in what looks like quarters coverage. The QB scrambles and throws his way and he high points for the INT.

Vs N.C. State wide right his size may be a factor here against a bigger WR Kelvin Harmon (#3) knocked off balance by a push leading to an easy receptions

Against the run he is a willing participant, who will take on blockers to attempt to set the edge, stick his nose in the pile or chase down runners from the backside. When tackling face to face he must improve his technique. I saw him several times duck his head dangerously low, exposing the back of his neck trying to make tackles.

At North Dakota State at the bottom of the screen you see him start to lean forward on his toes signaling he’s coming. He’s able to chase down the runner on the far side saving a big run.

At North Dakota State he’s on the right edge and shows his willingness to get into the mix to stop the run.

Moreland plays with good physicality despite his lack of size. He has a nice jam at the LOS, is willing to battle the bigger WR and helps out in the running game. But that size will hinder him as well leading him to grab more to stay with receivers (at least 6 DPI in the games watched) and his poor arm length will be a deficiency. But that doesn’t mean he doesn’t have a place just last year there two players of similar size drafted Donte Jackson and Avonte Maddox.

With ball skills like he has someone will take a chance on him. He’ll get a shot at playing in the slot where you can let him be physical with WR’s and help in the run game.