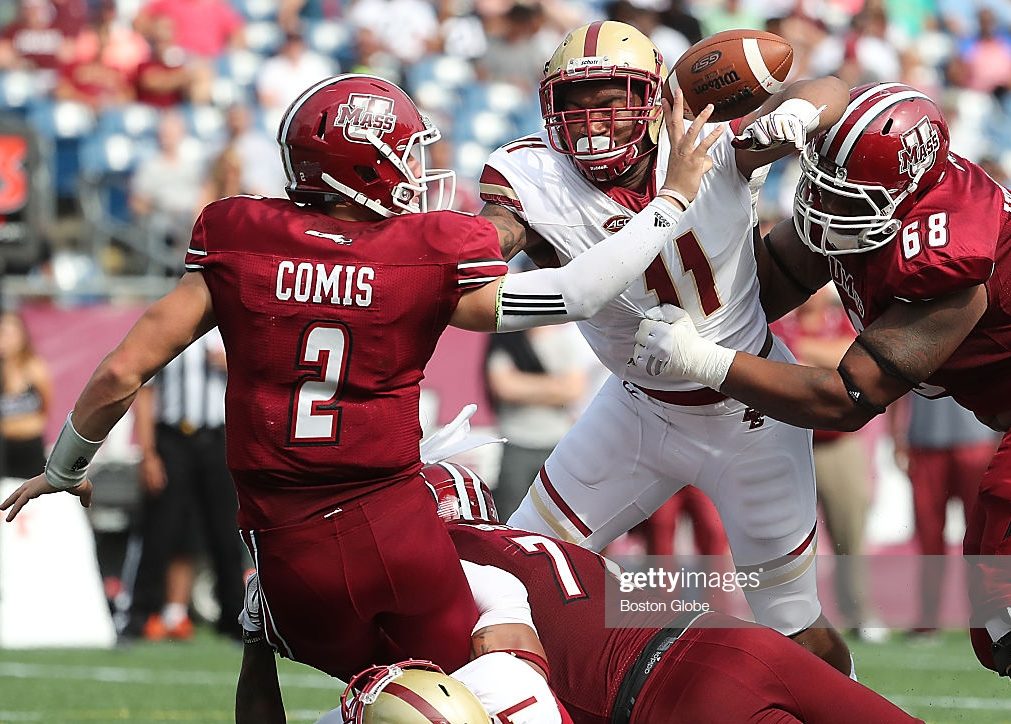 My last profile of this year’s pre draft process is focused on Boston College EDGE Wyatt Ray. While his teammate Zach Allen may have stolen a lot of the spotlight, Ray is a pretty impressive pass rusher as well. He really got an opportunity to shine during his final season in which he finished with 11.5 tackles for a loss and nine sacks. He was also able to win All-ACC Third Team honors from his efforts and he could be a player to monitor in the mid rounds of this year’s draft.

Ray has strong arms and a strong upper base, as proven by his 25 reps on the bench press at this year’s NFL Combine. Watch Ray show off his explosive power on the play above, first as he knocks the right tackle backwards and then uses a nifty swim move to get to the quarterback. The Boston College pass rusher uses his strong arms to gain leverage on the right tackle before swimming over and notching an impressive sack.

Let Ray show you himself, how powerful his bull rush and arms can be. On the play above, Ray (#11) drives the left tackle with one arm! With a lot of power out of his stance, Ray has the physical tools to be a refined pass rusher in the NFL.

While many of Ray’s sacks came from stunts or swim moves, he did show flashes of some bend around the edge. A quick swipe from the Boston College pass rusher gives him access around the edge and another impressive sack. While not a common occurrence on his tape, it shows potential for another move in his arsenal. Though Ray is not the most flexible athlete or fastest guy off the line of scrimmage, if he can continue to demonstrate good use of his hands, there is some hope for his bend around the edge.

Ray also shows ability to set the edge and be a good run defender as well. He opens up a bit wide on the play above but he recovers and is able to set the play for no gain due to his long wingspan. He is exceptionally gifted with using his large frame to get off blocks.

Setting the edge and maintaining gap control is one area where Ray is going to have to improve on should he seek a full-time role at the next level. Too often he crashes in, giving up the edge which allows running backs to just bounce outside for a big gain. Ray is going to have to learn more discipline when it comes to setting the edge as he has a tendency to lose the edge on occasion.

Earlier I talked about Ray’s lack of flexibility, and it does seem to be a pressing concern when it comes to his bend. The pass rusher would have easily racked up a few more sacks if he had not been run up the arc so many times. Perhaps with a little polish from coaching, Ray could find better techniques to getting around the corner.

Ray has only made 16 career starts while at Boston College, so he is still extremely raw as a full-time player. He shows the promise one would expect from an athleticism standpoint, showing good strength and use of his hands. He also shows the downfalls you would expect from a raw prospect when it comes to the technical side of the game, maintaining the edge and bending the edge as just a few examples. Ray would project best as a mid-round prospect who could be a capable starter one day.