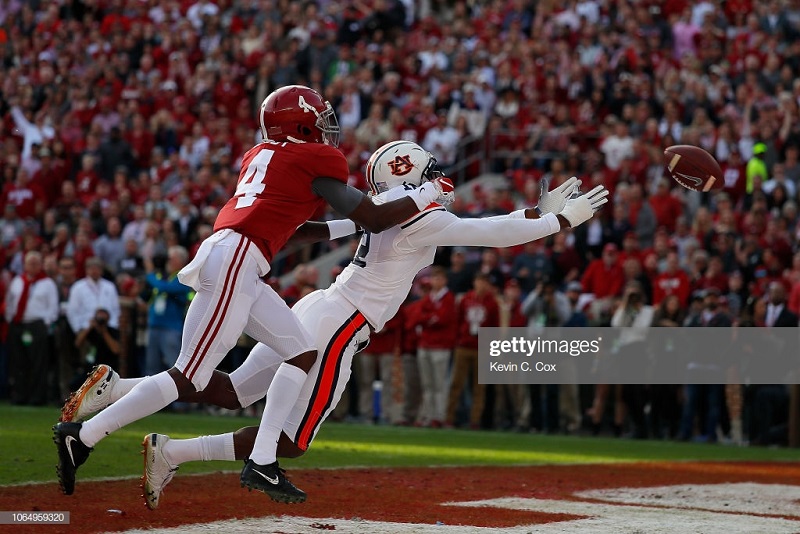 Jamel Dean (#12) has the physical traits you want. He is the definition of the height/weight/speed prospect that will get you on the list to get into the club. That speed though. Logging a 4.30 40 yard dash doesn’t come along every year. But does that translate to on field performance?

His size is the first thing you notice looking equal to or bigger than the receivers from which he was lined up against.  He played primarily on the outside but saw occasional time in the slot and deep when there were no receivers to his side. Scheme led him to play Press a majority of the time.  He shows good patience, good lateral movement and plays physical using his long arms to redirect receivers. He obviously has the speed to run with crossing routes and the deep routes and is able to stay close to take away that option for the QB for the most part. On deep sideline balls he’ll lose contact with the WR, fading to the inside when looking back for the ball, giving the receiver space to make the catch and doesn’t seem to track the ball well over the shoulder but that could be more about his positioning.  In Off Man he leaves too much space on underneath routes but closes well to make the tackle. He displays good COD to handle the cuts laterally and to come downhill and disrupt the catch window. He gets grabby at the stem unnecessarily even when he looks to be in good position. He looked comfortable in Zone but it was primarily played in prevent defense and late half situations.

Vs Mississippi State from off Man he handles the hesitation double move, shows good COD to break on the comeback route and uses his left hand to reach in front and right hand to slap from the back

Vs Mississippi State lined up wide left it’s a go route up the side line. Coverage is good but when he turns his head he fades to the inside opening up space for the WR

At Georgia lined up wide left he gets a jam at the LOS is running in stride with the WR. About 10 yards out in good position, he starts to grab and when the WR breaks out right he gets caught for the DPI.

At Georgia, in off coverage vs a curl route. Again he grabs the jersey while making a break on the ball and showing good hands making the INT in a contested catch situation

At Alabama he’s over the slot to the left and when the WR motions out Dean rotates to the deep half. He keeps good depth and gets in good position on the post coming from the outside.

Against the run, he’s willing to help on the edge or filling a gap.  He hesitates some when coming up either taking on blockers or to make a tackle. Speaking of blockers he struggles to get off of blocks and playing with a little more aggressiveness and urgency to shed would help. Overall, he’s a solid tackler able to get down runners from the side and back. Head on, he tackles too high leading to a stalemate needing help from teammates.

Vs Texas A&M lined up to the right and the run comes right at him. He hesitates a bit, steps up into the gap and makes the stop despite being too high

Vs Texas A&M he sneaks in from the right and blitzes of the edge. The QB tucks to run and the trips him up for the TFL.

At Georgia from the right he comes up to help vs the run.  The RB cuts outside and he shows COD and uses his speed to track down the runner.

Vs Purdue he’s on the left side and a sweep comes his way. You’d like to see him get up field a tad quicker but he puts a good hit on the runner

I like what I see here.  He has all the requisite physical traits need to play against today’s big receivers on the outside.  He has a ton of Man coverage experience against quality opponents, is willing to help against the run and would fit nicely as a gunner on special teams.  As with all players there is still work to be done. Get him to be less grabby in off coverage, help him keep contact when getting his head around and convince him to tackle lower and you’ve got a quality DB.