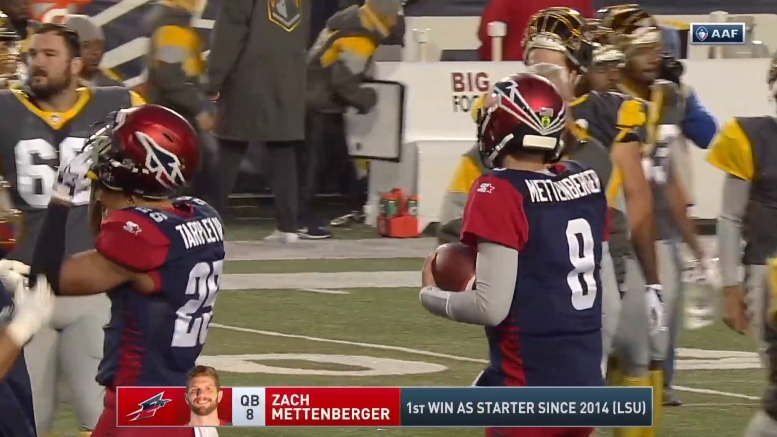 Prior to last week, the last time that quarterback Zach Mettenberger had played in a meaningful game was during the 2015 season as a second-year player, a former sixth-round pick of the Tennessee Titans. Due to injuries, he started 10 games during his first two seasons in the NFL, but would never take another snap.

He was left go the following year, and eventually landed with the Pittsburgh Steelers. While he spent the entirety of the 2016 season on the 53-man roster, he only dressed for the season finale because the team was resting starters. He did not play a snap.

The following year, he was released after the 2017 NFL Draft in which the Steelers selected Joshua Dobbs in the fourth round. He never connected with another team, but he eventually landed with the Memphis Express in the Alliance of American Football.

He spent most of the first three games of their inaugural season on the bench, however, playing behind former second-round bust Christian Hackenberg, before he was benched last week. Mettenberger came in and played well, completing 75 percent of his passes and throwing for two touchdowns in a failed comeback attempt.

It was enough for Head Coach Mike Singletary to make the official lineup change, installing Mettenberger. The Express took on Mike Martz’s San Diego Fleet yesterday and came out with their first victory of the season.

While that effort was largely aided by an ill-advised fake punt attempt by Martz in its own territory, Mettenberger also deserves credit for his efforts, completing 18 of 25 pass attempts for 174 yards. He threw one touchdown and also ran for another as the Express claimed its first victory by a 26-23 margin.

They still have a long way to go, however, as they are in the Eastern Conference, which features the Orlando Apollos, who just went 4-0 on the season, and the Birmingham Iron, which will look to do the same today. a 1-3, they are already three games behind.

This was the first victory of Mettenberger’s professional career in any league. He lost all 10 of his starts with the Titans in his first two seasons and never got another opportunity to do so. But he is now 1-0 in the AAF.

“It’s definitely exciting for me to win. It’s been a long time since 2015”, he told the team’s website after the game. “There’s nothing better than to win. It’s an awesome feeling”. Will there be more winning to come for the former Steelers quarterback? We’ll find out starting next week.

Rounding out other Steelers-related bits, defensive end Greg Gilmore finished the game with two tackles and two pressures, in addition to the game-sealing fumble recovery. On the losing side, Terrell Watson rushed for 43 yards on 10 carries, while Travis Feeney recorded three tackles.