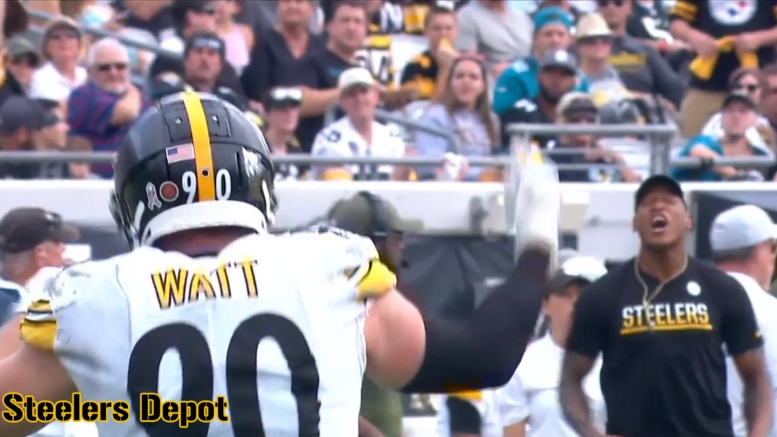 We already know that Pittsburgh Steelers outside linebacker T.J. Watt had a good second season in the NFL. His year was highlighted by 13 sacks, which was the most by any Steelers linebacker in the past decade—or any Steelers defender. He also forced six fumbles, two of which were recovered by the defense, one for a defensive touchdown.

He started off the season right with a three-sack game, but went three games without one after that before breaking out again for another three. His production after the bye week grew more consistent, recorded at least one sack in the last 10 games. He did have another three-week ‘dry’ spell, but he also improved his game during that time in ways that are not evident statistically.

But his second-half growth was featured in an article recently by Pro Football Focus, which listed him as one of the year’s ‘second-half stars’—players who only had a so-so beginning of the year or worse but played at a higher level toward the end.

“Watt is another example of a player who hit his stride in the second half of the season rather than hitting the wall”, Paul Duncan wrote. “While his first-half box score numbers were impressive at first glance (his 27 quarterback pressures ranked fifth among edge defenders from the AFC North), what the box score doesn’t show you was the fact that 12 of those pressures were either charted as cleanup or pursuit pressures”.

This is something that we have talked about here previously regarding the site’s evaluation of Watt, which wrote an article about his pressures in the middle of the season projecting that his sack production would diminish. They issued a mea culpa after it did not, and wrote a follow-up article explaining how he grew his game.

“Watt was a beneficiary of his defensive scheme rather than winning his pass-rushing matchups outright” earlier in the year, Duncan writes. “That changed over the last half of the season though, as Watt produced 25 pressures over the last eight games, with only four of them coming via scheme. Watt raised his pass-rush win percentage from 12.8% in the first half to 20.7% in the second half and recorded a pass-rushing grade of 90.0 from Weeks 10 to 17 that was second only to Von Miller in that span”.

While he finished off the season recording one sack in each of the final three games, those were the only three sacks he had in the last six, hitting 10 sacks by the Steelers’ 10th game. Hopefully in 2019 he can combined that improved success rate with a continued elevated sack total. Because regardless of how a player gets them, they’re still valuable. Now he has a variety of ways to get to the quarterback.