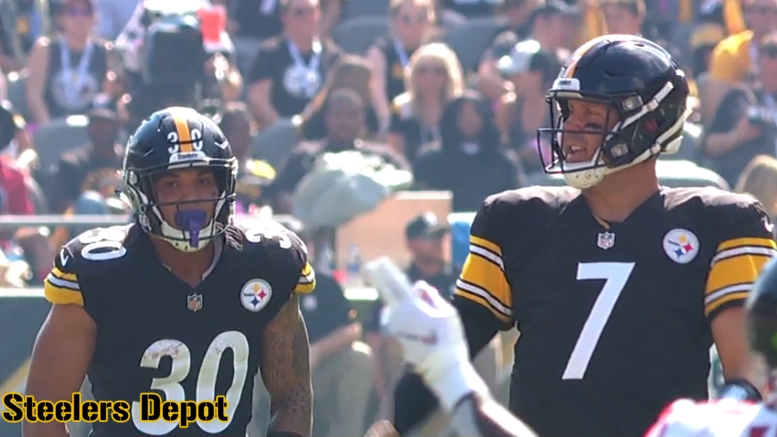 While Ben Roethlisberger has certainly been painted in an unflattering light for most of the offseason, his current teammates continue to publicly have his back. Add Ryan Switzer and James Conner to the list.

Both players responded to a tweet I shared yesterday, a clip of Big Ben mic’d up against the Carolina Panthers last year. In it, he pulls Jaylen Samuels aside to congratulate him after scoring his first career touchdown, a six yard reception late in the blowout win.

One clip that popped into my mind with all the talk about Ben Roethlisberger's lack of leadership. Pulled Jaylen Samuels aside after his 1st TD vs Carolina. Seems like something a halfway decent leader/teammate does. #Steelers pic.twitter.com/Yxxt81useN

“Congratulations, that’s awesome. I’m proud of you. Way to get around him, get in, make a play,” he says in the clip.

To be clear, I’m not pointing to the fence and saying that proves Ben is the ultimate leader. That’s silly. But it should say something. Roethlisberger didn’t have to stand on the sideline, wait for Samuel, and pull him aside for that kind of praise. The game was over, the Steelers had won, and it was the last drive of his day. I assume Ben and Samuel didn’t have that much of a relationship. Ben the oldest guy on the team, Samuel a rookie who had barely dressed, played, and probably got minimal practice reps with (this was before Conner’s injury). Him saying nothing wouldn’t have raised any eyebrows.

Apparently this isn’t the first time Roethlisberger’s done it, too. Conner said #7 did the same to him after his first score in Week One.

Did the same to me! Did it all season thru the good & bad.. Ridiculous that this is even a topic of conversation about a HOF QB. Leader without a doubt. https://t.co/htWR44VXLG

While Switzer also went to bat for Roethlisberger.

In fairness, Switzer has also said complimentary things about his time with Antonio Brown too so I don’t think he’s taking “sides” here. He’s seemed to enjoy playing with both guys and hey, who can blame him. Those are a pair of Hall of Famers.

JuJu Smith-Schuster jumped in later in the evening with this photo and tweet of the two, a short time after Brown took another shot at the organization. I don’t think those two things are a coincidence.

I was so blessed to enter the league and play with a Hall of Fame QB as a 20-year old. Ben has taught me so much, he’s a true Leader and I can’t wait to rock with my guy this season. pic.twitter.com/Atei8eDiZC

Some criticism towards Roethlisberger is totally warranted. If you’ve read my articles/tweets, you know where I stand. Ryan Clark summed it up well, saying Ben isn’t a “natural leader” whose had to work for it over time. That much seems obvious. He entered a locker room, unlike most franchise quarterbacks, with most of the pieces already in place, a team led by its veterans, defense, and run game. Roethlisberger has made his mistakes; his comments about Brown needing to run his route “flatter” against Denver will always be strange and inaccurate, and I still believe stopping his weekly radio show is the right move. He also isn’t blameless for everything that went down in the AB implosion.

But if he was this toxic, divisive, terrible teammate, I sincerely doubt he’d have that moment with Samuels and Conner. And that’s the point here. The truth is in the middle. Roethlisberger isn’t the world’s greatest teammate, not the first (or second or third) thing you’ll remember about him 15 years from now, but far from the alienating figure in the locker room he’s been made out to be.