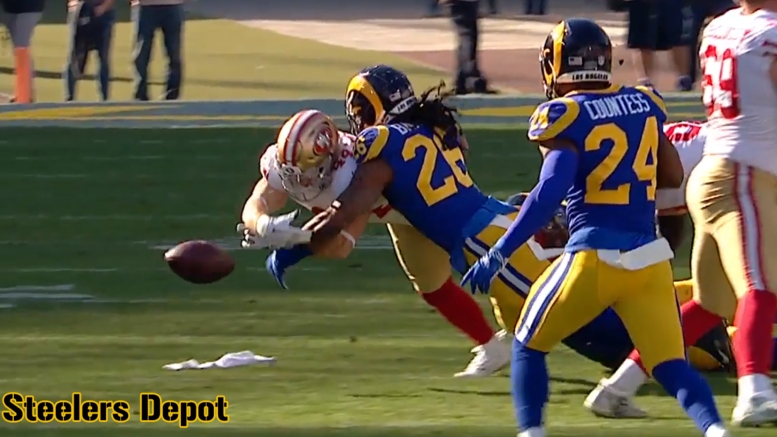 The Pittsburgh Steelers found themselves a new big hitter on the defensive side of the ball in Mark Barron, and the good news is that it didn’t cost them anything. Well, they did reportedly give him a two-year, $12 million contract, nearly half of which is coming in the form of a signing bonus.

But the more significant cost could have been a third-round pick. Because Barron was released by the Los Angeles Rams earlier this offseason, he is classified as a street free agent rather than an unrestricted free agent, and because of that, his signing does not factor into the compensatory draft pick formula.

Had he been an unrestricted free agent and the Steelers signed him, it likely would have cost them the third-round pick they are in position to land thanks to the $13 million per season contract signed by former running back Le’Veon Bell.

Though they also lost Jesse James and L.J. Fort in free agency, the potential compensatory picks that they could have been in-line for their deals—James at $18 million and Fort at $10 million over three years in both cases—figure to be cancelled out by the contacts signed by Steven Nelson and Donte Moncrief.

The Steelers don’t often have the opportunity to land such a high compensatory pick, but when they do have that chance, they do try to preserve it even if they don’t ordinarily pay much attention to the compensatory picks the way some other teams do.

The team most recently had a third-round pick in 2017 thanks to the contract signed by Kelvin Beachum, which they turned into running back James Conner, making the Pro Bowl last season. Before that, they had another third-round pick for the 2014 NFL Draft with Mike Wallace’s departure the year before. That one ended up being used on Dri Archer.

It’s true that the Steelers are rarely big spenders in free agency, but they also rarely lose valued commodities. And when they do, they usually have more money to spend on free agents. This year, they were able to spend good money while still preserving their most valuable compensation, at least based on projections.

It’s a page right out of Ozzie Newsome’s playbook with the Baltimore Ravens, who have yielded more compensatory picks than any other organization in history. When the Ravens lose big-name free agents, they tend to prefer targeting players who were released to sign.

We should also point out that this strategy doesn’t always work out. The preference is to actually retain your good players, and the Ravens have let a lot of talent go over the years without properly replacing them. And whether or not it’s worth it depends entirely upon how you use the pick. Do you get a Conner or an Archer?