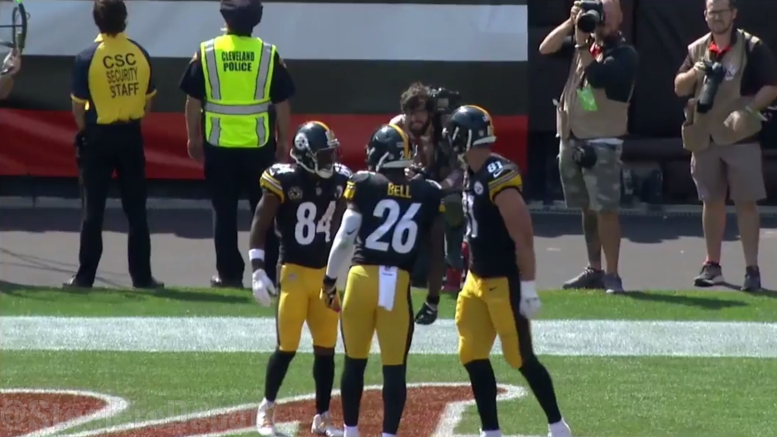 The bad news is that the Pittsburgh Steelers are losing significant players at all three skill positions this spring. The team has already agreed in principle to a trade that will send perennial All-Pro wide receiver Antonio Brown to the Oakland Raiders. Reportedly, tight end Jesse James has agreed in principle to a deal with the Detroit Lions. And running back Le’Veon Bell will inevitably sign a very lucrative contract in the coming days.

The good news is that they already have quality top players at all three positions. JuJu Smith-Schuster made the Pro Bowl last season and will slide into the number one role the same way that Brown did in 2013 after Mike Wallace departed in free agency.

James Conner already spent all of the 2018 season when healthy as the lead back, rushing for nearly 1000 yards with 12 rushing touchdowns a 4.5 yards per clip, with another roughly 500 receiving yards and another touchdown, on his way to a Pro Bowl trip of his own.

While Vance McDonald wasn’t named to the Pro Bowl, he did have the best season a tight end around here has had in several years with 50 receptions for over 600 yards and four touchdowns, and he figures to be even more involved in 2019 after receiving only 72 targets in 2018.

While they may have their numbers ones at these positions, none of them are areas of the roster in which you can get by with just one. Right now, the Steelers’ number two receiver projects to be either James Washington or a player not yet on the team. Jaylen Samuels might be their number two running back (or he might not), but they still need another player here. Xavier Grimble has been a number three tight end for his entire career and it’s not clear if he can thrive in the number two role.

That’s at least three positions on the offensive side of the ball that the Steelers have to address this offseason—but at least they don’t have to worry about quarterback or the offensive line. And they’re not looking for top guys. Perhaps a number two starter at wide receiver, but the rest we’re talking about backups.

Hopefully—hopefully—they can address these holes on the cheap, though the mid-level tight end market is apparently going insane this offseason since there aren’t many notable names at the top of the market.

The Steelers do have 10 draft picks this year, which they may use to try to address all three positions, but hopefully they can add at least one or two skill players in free agency on reasonable contracts as well.