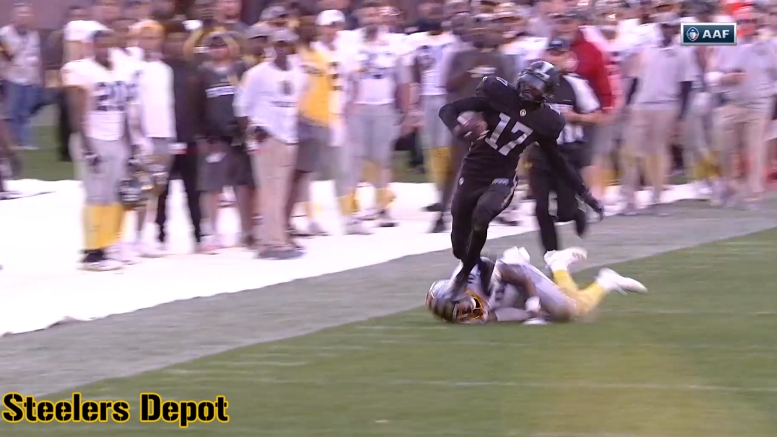 The Birmingham Iron helped to vault itself into being one of the better teams in the Alliance of American football through three weeks by playing very solid defense. The defense has slipped in recent weeks, however, and so too have their results. They lost two games in a row after beginning the season 3-0.

But the offense helped spark a turnaround against the San Diego Fleet in a big win last night in what was one of the more exciting games of this young league’s history, the Iron winning on a late field goal by Nick Novak to make it 32-29.

The offensive rejuvenation was orchestrated by quarterback Luis Perez who started the first five games but was benched during last week’s loss. His backup, Keith Price, started last night’s game, but he was injured after throwing for passes, the team cycling back to Perez.

Perhaps the demotion gave him the fire that he needed, because Perez had easily his most dynamic showing of the season, throwing a career-best 359 yards. He also completed three of his 27 completed passes for scores. In the first five games, he had not thrown even one touchdown pass.

To nobody’s shock, the first of those touchdowns went to Trent Richardson, the former Alabama running back, who scored the Iron’s first eight touchdowns of the season, all on the ground. Price threw a touchdown last week to finally break the skid. Perez’s other two touchdown passes on the day went to L’Damian Washington, a 6’4” wide receiver who spent the winter and into the spring of 2015 with the Pittsburgh Steelers.

Originally an undrafted free agent out of Mizzou, Washington bounced around to five different teams during his rookie season before the Steelers signed him as a Reserve/Future signing in January of 2015. He remained on the roster through the draft, but suffered a severe calf injury in OTAs in which the muscle separated from the bone, which resulted in him being waived injured.

It’s impossible to say that his career would have gone much differently had that injury not occurred. He continued to bounce around and had a marginal one-year stint in the Canadian Football League. So yesterday’s game was the biggest moment of his football career since Mizzou.

Washington only caught four passes, but he turned them into 128 yards, including a long 83-yard score, and he would add another touchdown later in the game. Richardson continued his rushing touchdown streak as well, giving him nine on the ground and 10 in total on the season.

You bet @MizzouMonstar2 is living up to his name!

Also of note in the game was Jamar Summers recording his third interception of the season, though he was also on the losing end of some big plays during the game. On the other side was former Steelers running back Terrell Watson, who recorded two touchdowns for the Fleet, one rushing, one receiving, in the losing effort. Travis Feeney also recorded an interception for the Fleet, his first.

San Diego punches it in for 6, and converts the 2 pt. conversion, narrowing the deficit, 21-17. @AAFFleet | #BIRvsSD pic.twitter.com/1V62WOGrRt

Terrell Watson gives the #SDFleet the lead with his second TD of the night! 🙌 pic.twitter.com/dGCcbH3V9u

As I reminded last week, you can watch a full replay of each AAF game on the league’s website.