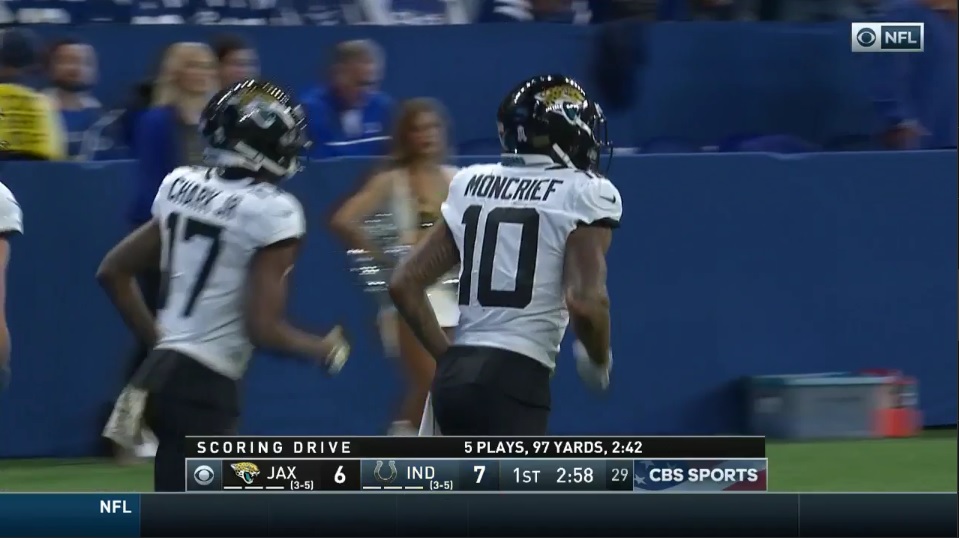 New mini-series I’ll work on over the next week or two. How their new free agents, Donte Moncrief, Steven Nelson, and Mark Barron fit into their respective side of the football and how they replace 2018’s starters. Today, we’ll start with Moncrief. The route concepts and traits he’ll have to continue to show to partially replace Antonio Brown and his role in the offense.

It’s a big part of the Steelers’ route tree. Especially working as that backside “X” receiver, part of your route adjustments are based on the cornerbacks leverage. If he’s shading outside, you can win inside on a slant. That means working through the corner, showing strength and hand use, to defeat press and not get knocked off the route because the timing of it is so important.

Examples of it from Moncrief, a 22 yard reception last year, and Brown. Both end in completions.

Each receiver at the top in the clip below.

Brown found the end zone as often as anyone last year, hauling in 15 touchdowns. While he wasn’t the top threat to run a fade, again, it’s partially based on the corner’s leverage, and was something he could do. Pulling it off is largely about your release. Get the corner to think you’re going to run a slant (slant or fade are the two most common concepts near the goal line) and then stem back outside to run the fade.

That’s what we see here. Moncrief setting the corner up before bursting outside and making a tough, combative grab, and Brown in 2017 against the Green Bay Packers, keeping the corner flat-footed and making a harder-than-it-looks over the shoulder grab.

3. Designed Screens (on 3rd and long)

Jacksonville ran one identical concept to one we’ve seen from the Steelers, both under Todd Haley and Randy Fichtner. On some 3rd and longs (10+, normally even farther than that), they’ll run this underneath drag screen to get the ball in the X receivers hands. No other option in the route, everyone else is blocking.

Moncrief and Brown have each converted on these types of plays, as you’ll see below.

When given a free release, that backside receiver is going to need to find the soft spot in zone coverage. Here, Moncrief and Brown run deep dig routes against loose zone coverage, not allowing anything vertical. Both do a nice job of finding the window, drifting away from the underneath overhang defender in their hook/curl zone. Then they break down after crossing the window to avoid running into the next defender.

In this clip, Moncrief is at the top, AB the bottom.

Again, to avoid anyone yelling at me in the comments, Moncrief isn’t replacing Brown. Their skillsets are far from identical. Brown is in another class as a route runner; Moncrief is only average there. He isn’t the YAC threat Brown is either. Not even close.

But conceptually, there are things they share. If Fichtner can maximize those while hiding the weaknesses of a Brown-less offense, tall task, I know, the Steelers will still move the football effectively.