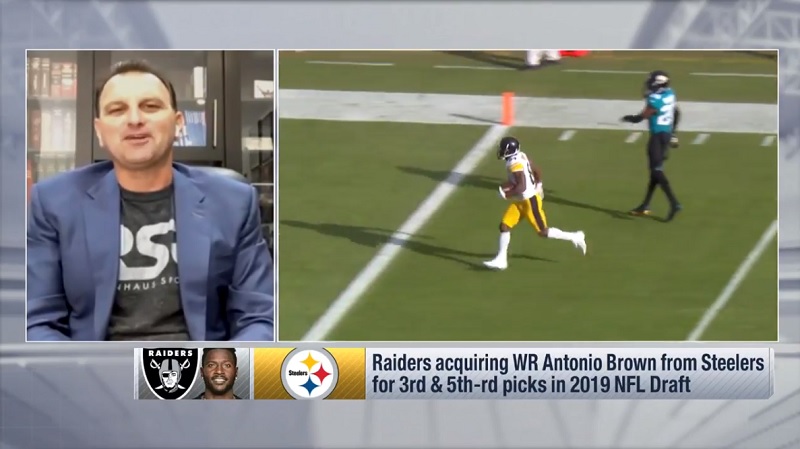 During a Sunday interview on the NFL Network, Brown’s agent Drew Rosenaus, effectively confessed that their weren’t really any serious contenders to trade for his client when it came to those that could meet the wide receiver’s needs and contract demands.

First, Rosenhaus admitted that the Raiders having quarterback Derek Carr already in place and having an experienced and offensive-minded head coach in Jon Gruden played a big part in Brown wanting to get traded to Oakland.

“Well, you know, rather than dealing with hypotheticals, let me just say, it worked out great,” Rosenhaus said when asked if Brown still would have agreed to be traded to the Raiders even if they hadn’t first agreed to redo his contract once dealt there. “It was a win-win because, you’re right, Jon Gruden was a big part of this as was Derek Carr. I mean, certainly Antonio is a great receiver, one of the best of all time, but it’s hard to reach your potential if you don’t have an offensive coach, or a quarterback that can help you execute.

“So we’re thankful that Antonio got a new contract, we’re thankful that he’s with Raider Nation, one of the marquee franchises in the NFL, and we’re very excited that he’s got a terrific coach and a terrific quarterback. Those things are very important. You know, when you play for so many years with Ben Roethlisberger, I think it’s important that you continue to have outstanding quarterback play.”

Later during Rosenhaus interview, the agent essentially confessed that while there were other teams potentially interested in trading for Brown throughout this long process, the list of those that could check all the necessary need boxes that his client had.

“Well, I’m not going to comment about whether or not I negotiated with other teams, but I will share with you that there were other interested clubs,” Rosenhaus first explained. “I’m not sure people realize just how many teams were interested in Antonio, but it was a very unique situation in that this is the first time that I can remember a player with three years left on his contract, got guaranteed money added to his deal, and got a raise without adding anything, without adding any years.

“Not every team in the league would do that. Not every team has done that. In fact, I don’t know that anyone has, so credit to John Gruden. [general manager] Mike Mayock, the owner, Mark Davis, this was a very bold move by the Oakland Raiders and we’re excited that it worked out that way.”

That’s quite the confession by Rosenhaus, who earlier in the interview once again let it be known that whichever team came forward with serious interest in Brown would be pretty much demanded to redo his client’s contract if they wanted to trade for him.

“Things really heated up with the Raiders about 48 hours ago,” Rosenhaus said. “The Steelers gave the Raiders permission to speak with us. Apparently the Steelers and the Raiders reached an agreement on compensation and as everyone knows, since Antonio was going to be traded, we were looking to adjust his contract.”

While the Buffalo Bills seemed to be very interested in trading for Brown as of Friday night, that deal obviously never happened and while Rosenhaus wouldn’t say if he ever received permission from the Steelers to talk to Buffalo about potential contract demands his client had, it doesn’t sound like a deal was close to ever being brokered just the same.

“I’m not sure,” Rosenhaus said when asked what happened with the Bills failed attempt to trade for Brown. “You know, [Buffalo general manager] Brandon Beane came out with a very eloquent statement, he said that they looked into it with the Steelers and they decided to not pursue the trade and we respect that. So, the Bills decided it wasn’t a great fit for them and it just didn’t work out. So, we moved on and started talking to the Raiders and Antonio was very happy to be in Oakland. we wish the Bills the best.”

Finally, Rosenhaus was asked if Brown just nixed any trade to Buffalo potentially happening because he just didn’t want to go there.

“I don’t know that there was ever an option for us, quite frankly,” Rosenhaus said. “We never got in that position and it really wasn’t something that it was up to us to decide. I don’t think the Steelers and the Bills were able to work something out.”

Personally, I think the Raiders were the only team that legitimately wanted to trade for Brown that also didn’t mind meeting the wide receiver’s financial demands. They probably knew after the Bills backed off attempting to trade for Brown that they were the one and only team remaining, or at least the only one that could get Brown’s approval to play for in addition to being willing to meet his contract demands. That’s why Raiders general manager Mike Mayock likely stood firm in not giving the Steelers anything higher than a third-round selection as part of the deal.

This was a unique power play by Brown and it worked out great for him and very poorly for the Steelers in regard to not only trade compensation, but dead money as well. That said, and while Brown will be applauded by many around the NFL for what he accomplished since Week 17 of the 2018 regular season, I doubt you’ll see a long line of players forming a line behind him attempting to duplicate what the wide receiver just did.