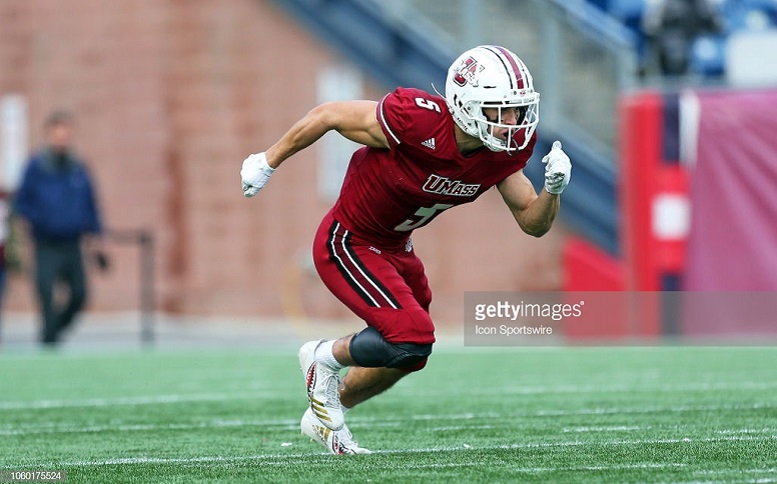 The Pittsburgh Steelers pre-draft visits might just get underway as early as this Sunday, according to a Friday report on Twitter.

According to Connor Livesay of SB Nation on Friday, Massachusetts wide receiver Andy Isabella has an official pre-draft visit scheduled with the Steelers for Sunday.

#UMass WR Andy Isabella had a private workout with the #Chiefs early this morning and has an official visit scheduled with the #Steelers on Sunday.

Isabella, who reportedly had a strong pro day on Thursday, is considered to be one of the top slot wide receivers in this year’s draft class. At the combine, Isabella measured in at 5086, 188-pounds with 29 3/4-inch arms and 8 3/8-inch hands,. He ran his 40-yard-dash in 4.31-seconds while in Indianapolis and registered 15 reps on the bench to go along with a 36.5-inch vertical jump and a 10’1″ broad jump. His short shuttle time at the combine was 4.15-seconds and his 3-cone time was 6.95-seconds.

Cards, Bengals & Bucs sent WR coaches to @UMassFootball pro day yesterday, and Lions, Bills, Jets sent their ST coaches, all to see WR Andy Isabella, who had good workout, caught the ball well and was quick out of breaks. He'll return punts in NFL, too. Stood on combine numbers.

Prior to the combine, Isabella reportedly had a strong showing at the annual Senior Bowl and it’s a good chance the Steelers talked to him some there in Mobile, AL. In his four seasons at Massachusetts, Isabella registered 231 total receptions for 3,526 yards and 30 touchdowns. 102 of those receptions for 1,698 yards and 13 touchdowns came in 2018.

The Steelers currently have quite a few slot wide receivers under contract for 2019 in JuJu Smith-Schuster, Ryan Switzer and Eli Rogers. Smith-Schuster, however, can play on the outside as well.