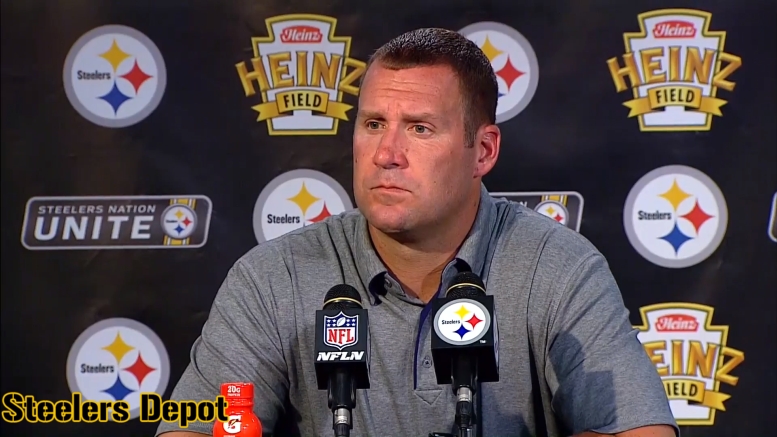 Matt Verderame first reported yesterday that he was being told Pittsburgh Steelers quarterback Ben Roethlisberger was strongly considering no longer doing his weekly radio show on The Fan for this upcoming season. No offense to the reporter in question, but I’d never heard of him before and was skeptical of his outlet, Fansided, being the first on that sort of ‘news’.

According to multiple sources, #Steelers QB Ben Roethlisberger is expected to relinquish his regular radio show in Pittsburgh prior to next season.

Roethlisberger is hoping that it helps his standing with teammates.

Tonight, however, Mike Florio of Pro Football Talk is also being told that Roethlisberger is “unlikely to continue the show”, though a final decision has yet to be made. Ordinarily this wouldn’t mean anything at all, but the fact that so many of the comments that he has made on that show, especially over the past season, have drawn criticism makes it a legitimate conversation.

The Steelers have had a tumultuous offseason with the ugly departures of two of their most high-profile players in Antonio Brown and Le’Veon Bell, and on their way out the door, both of them levied criticisms against Roethlisberger for his leadership, citing examples of comments that he made during his radio show.

His most egregious misstep came following a bitter loss to the Denver Broncos that ended a six-game winning streak, dropping them to 7-3-1 on the season and beginning a 2-4 end of the season that resulted in them missing the postseason.

Though it was their first loss in a while, frustration had been mounting for Roethlisberger in particular. They narrowly escaped the Jacksonville Jaguars the week before with a win, a game that featured three interceptions from the quarterback, including one in the red zone.

Roethlisberger sealed the loss to the Broncos with a goal-line interception in which he targeted Brown but was intercepted by a defensive lineman who had been backed into the end zone. As he was defending himself on the show, he knocked Brown for the route that he ran, and also expressed surprise that Maurkice Pouncey had blocked his assignment so far into the end zone.

That game also featured a significant moment for rookie wide receiver James Washington, who left his feet to go after a deep pass that he ended up being unable to hold onto for a drop. Roethlisberger said that had he just run underneath the pass, he probably wouldn’t have stopped until he hit the end zone.

Both of those comments, among others, have been the subject of numerous debates on sports talk shows and have been cited by then-current as well as former teammates as representative examples of the kind of person and leader Roethlisberger is.

While I thought he said some things he shouldn’t have said, I never thought much of the radio show in terms of it being a problem, but it has caused enough controversy that it is more than reasonable for the quarterback to be considering moving away from it, both for the team’s sake and for his own.