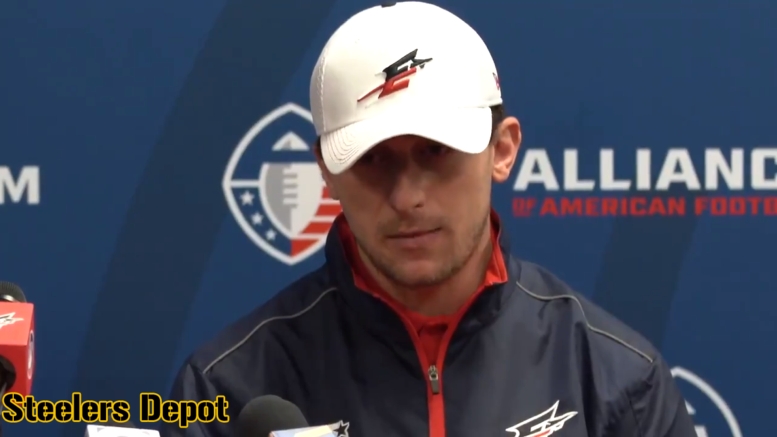 The Memphis Express recently acquired former NFL first-round quarterback Johnny Manziel during the week to add to their roster. The Express, heading into tomorrow’s game against the Birmingham Iron with a 1-5 record on the season, will be starting its third different quarterback of the season during the game.

But it will not be Manziel.

Granted, it’s not exactly a shock that a quarterback acquired literally less than a week ago would not be prepared to start a game, even in a lower level league like the Alliance of American Football. The Express’ offensive coordinator, Bobby Blizzard, said that he will be prepared to play, however.

Blizzard, who was in fact originally signed by the Pittsburgh Steelers as an undrafted free agent wide receiver in 2004, said that he drew some influence from his offensive philosophy from what Manziel was running during his Heisman Trophy campaign at Texas A&M.

“I mentioned the type of offense I ran, shouted some of the terminology I use, and his eyes lit up”, he told reporters. “He was calling out the plays before I even said anything. I looked at coach (Mike) Singletary and gave him a thumbs up”.

Manziel’s rights originally were assigned to the San Antonio Commanders, but they released his rights, having Logan Woodside at quarterback. By doing so, Manziel was subject to waivers, and the Express had the highest claim.

Memphis opened the season with former New York Jets second-round pick Christian Hackenberg as their starting quarterback, but he went 0-3 before he was benched in favor of Zach Mettenberger. Mettenberger would win his first start, but was injured early in last week’s game.

He was replaced by Brandon Silvers, who opened the season as the third-string quarterback, to show how far Hackenberg has already fallen, but given the circumstances, it’s pretty easy to predict that it won’t be long before Manziel is starting.

Of course, that was also his plan when he took his talents to North of the Border, signing with the Hamilton Tiger-Cats of the Canadian Football League. There, he was stuck playing as the backup to Jeremiah Masoli for six games before he was traded to the Montreal Alouettes.

He promptly threw four interceptions by halftime in his first starter. He would end the season having played eight games, completing 106 of 165 pass attempts for 1290 yards, throwing five touchdowns to seven interceptions—again, four of which came in the first half of the first game. Montreal finished 5-13 on the season, just a game ahead of Toronto for the worst record in the league.