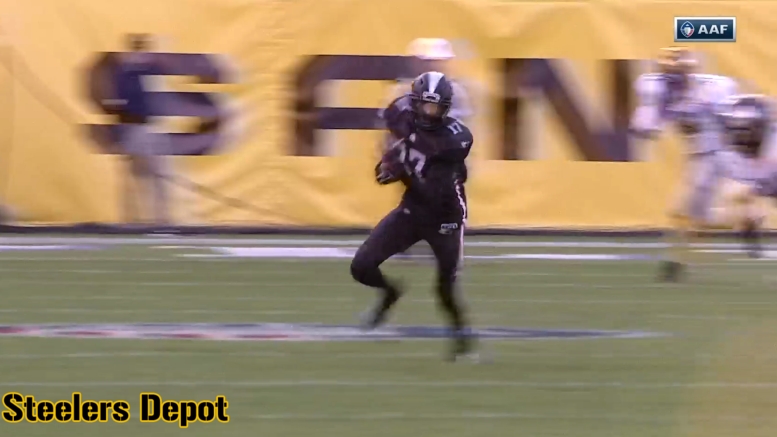 L’Damian Washington came out of Mizzou as a big 6’4” wide receiver with speed, yet went undrafted in part due to his limited experience on the field and his raw abilities. He would spend his first year there bouncing around to several teams in the offseason.

The Pittsburgh Steelers signed him to a futures deal the following January, but had to waive him injured by the end of May after he suffered a significant calf injury. That would be very near the end of his football career.

There is an article from the summer of 2017 in which he talks with the Canadian Football League’s website as a member of the Winnipeg Blue Bombers. “It was over for me”, he said of football, which was “not a thought for me” before the CFL came calling.

That didn’t work out too well in his favor either. But that was all in prelude to potentially finding his name in the newest American professional football league, the Alliance of American Football, in which he is a member of the Birmingham Iron.

The Iron is the 10th football franchise that he has been a part of since 2014 spanning three different leagues, and he just had his biggest game in any of them on Sunday in a big 32-29 victory for the Iron. He caught four passes but made them count for 128 yards and two impressive touchdowns, including a league-record 83-yard catch-and-run as well as a nice over the shoulder catch in the red zone.

That effort led to him being named the AAF Offensive Player of the Week for Week Six, the first time so far this season that an Iron player has received such a weekly award for either offense or defense, though they’ve had three different Special Teams Player of the Week Award winners.

“Washington had two touchdowns in his game and caught four passes for 128 yards, the fifth-most receiving yards in The Alliance this season”, Howard Balzer wrote for the league’s website. “It marked the first time a receiver had at least 125 yards and two touchdowns in the same game. The 83-yard score was the longest pass play from scrimmage this season and it tied San Diego running back Ja’Quan Gardner for the longest touchdown”.

That performance was a breakout for sorts for Washington, who was a more limited contributor in the first five weeks. On the season, he now has 15 receptions for 250 yards and two touchdowns, so that game literally accounts for a little over half of his yardage and both of his scores.

But that’s also in part because the offense has not been very good. Yet starting quarterback Luis Perez looked like a different player on Sunday after he was benched, coming in after his replacement was injured to throw for over 300 yards and three touchdowns.

We’ll see if the passing game can pick up where it left off during the final four weeks. Should that be the case, you can predict that Washington will be a key factor in that.