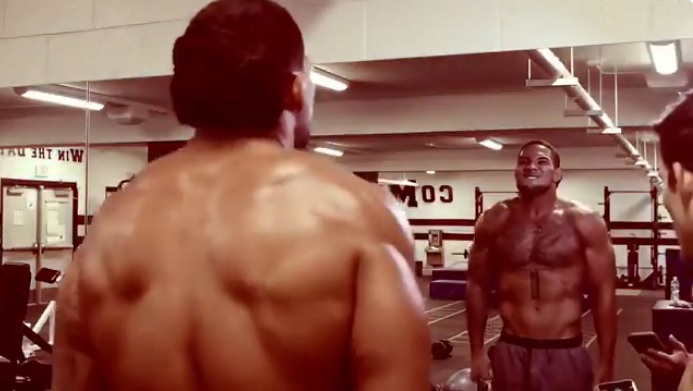 The Pittsburgh Steelers seem to be quickly building a history of running backs entering the league, playing for one season, and then learning that they must be in much better physical conditioning in order to play as they intend. They show up in year two looking like a different player. Le’Veon Bell did it. James Conner did it last year. Jonathan Dwyer…well, he did damn near the opposite, but that’s neither here nor there.

As for Conner, he’s looking to double down on his physical expectations for himself, as he told the team’s website recently that, while he knows he made a big jump from that perspective from his first season to last year, “I want to make a greater jump this year”.

To that end, he has already posted the evidence, posing with former Pittsburgh teammate Aaron Donald during a workout looking awfully fit. Presumably taken while both were in attendance at Pittsburgh’s Pro Day, it is proof positive that the third-year running back is already deeply entrenched in a transformative offseason workout routine.

Why is he so invested in getting in even better shape when he had a Pro Bowl season in 2018, rushing for nearly 1000 yards in 13 games with 12 rushing touchdowns, while averaging a comfortable 4.5 yards per attempt—not to mention nearly an additional 500 receiving yards?

He told the team’s website that he “learned last season that I am capable of playing in this league”, but he also “learned a lot of things I need to do better on and off the field”, one of which is growing a deeper understanding of his body and of the physical toll a long NFL season will have on it.

“I think my body is capable of doing the physical things. That is not an issue. The season is just long with the preseason and everything”, he said. “The shape you have to be in, the condition” is such that the demands on his body, at least those that he places on himself, are beyond that which he has already achieved.

Though he started every game he dressed in last season, this will technically be the first year in which he will be the starter by design, as, of course, Le’Veon Bell was supposed to be leading the way in 2018. Conner knows that he is ‘the guy’ now, and he wants to do everything in his power to ensure that his teammates will have their guy out there for the long haul.

That is something that Bell struggled with throughout his career in spite of the fact that he has been in exceptional physical conditioning. Conner, too, has missed games in each of his two seasons due to injury. The three that he missed in 2018 were due to a high ankle sprain, and he tore his MCL in 2017.