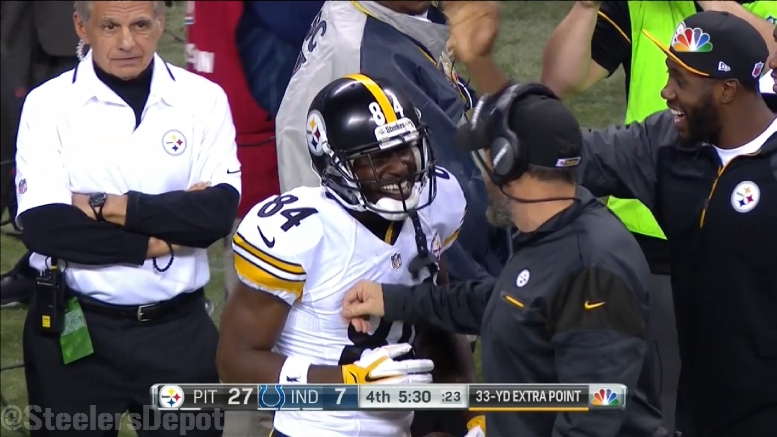 As of Wednesday, the Pittsburgh Steelers are reportedly hoping to have a deal in place for wide receiver Antonio Brown by Friday night. On the heels of that potentially happening, however, the Steelers former offensive coordinator, Todd Haley, who coached Brown for six seasons in Pittsburgh, was a guest on ESPN’s ‘Get Up!’ and he was asked several questions about the wide receiver.

First, Haley was asked about how Brown’s recent behavior and if he sees any connection to the player he coached during his time in Pittsburgh.

“Oh, I never saw any of that, obviously during my time there,” Haley said. “And I can only speak about the time I was there. And AB was a highly, highly competitive guy that, you know, I think some of these things that are coming out are what also has given him a chance to be one of the greatest ever, maybe the greatest ever, when it’s all over. So, you know, when you’re that competitive and that driven and have gotten to places that nobody thought he would ever get to, I think when frustration does come out, it probably comes out more than it does in a lot of other people.”

I wonder if Haley forgot about the time Brown threw a Gatorade cooler on the sideline when he was mad that he wasn’t thrown the football. Additionally, what about Brown throwing his hands up in disgust at backup quarterback Landry Jones during a game and then apparently yelling at him on the sideline? What about the whole Facebook Live incident in the locker room from a few years ago, did Haley forget about that? Maybe Haley was thinking the question was more related to what he thinks about Brown’s off-the-field behavior this offseason, so I digress.

While it’s obvious that Brown at this point in his career is very high maintenance in some aspects, Haley was asked Thursday if it will now take a special coach at that wide receiver and offensive coordinator positions for whatever team he ultimately lands with to deal with the diva pass catcher.

“You know, I think you need to have a strong guy in a position to coach him,” Haley said. “But there’s a lot of high-end wide receivers that I’ve been around that you need that and they need that and they just need that constant push and to let them know that you’re trying to get them to be as good as they possibly can be. And that’s what great players really want, they want to be pushed, they want to be coached and they want to know that the coach wants them to be the best they can possibly be – the great ones, that’s what I found in my time coaching.”

Haley also let it be known Thursday that there’s probably no other wide receiver in the league right now who works as hard as Brown does.

“But, he’s a great kid and the hardest worker I’ve ever been around,” Haley said. “I mean, there wasn’t a day he wasn’t ready to come out there and go full speed. We had to pull him back in walkthroughs and things like that. I mean, he is 100% all the time. So, it’s a high-charge guy you’re dealing with, but a great one.”

Wait, did Haley just call Brown “a great kid?” Oh, my, that’s not going to sit well with the wide receiver. Maybe Haley made that reference on purpose in light of the recent comments made by Steelers general manager Kevin Colbert, or perhaps that just goes to show how team owners, general managers and coaches calling players, ‘kids’, is more of a term of endearment and thus not meant to be derogatory or demeaning.

“Yeah, again, I can only speak of when I was there, but, I mean, these two had the best chemistry that I’ve ever seen between a quarterback and receiver,” Haley said. “They’re both very good field players and can adjust in the fraction of a second. I think the two of them together was a phenomenal, phenomenal combination, obviously. And all I saw was great respect.

“I’ve said this before, that if there was a miss, and misses were rare in practice, if a connection wasn’t made between those two, AB would come flying back [to the huddle], look up to Ben like he was looking up to his father and say ‘What did I do, what did I do?’ And it may have just been a bad throw by Ben at that time, but AB was so concerned with trying to be perfect. I thought the relationship was great and I was always interested in watching it because you were seeing real greatness between two guys that just knew what the other one was going to do most all the time and in a game that’s hard to do that.”

That’s a great quote from Haley as Roethlisberger and Brown were always seemingly on the same page together for most of the past six seasons. That, however, wasn’t necessarily the case this past season and especially during the team’s first seven or eight games. The two, however got back on track during the second half of the 2018 season and up until Week 17, it looked like everything was still fine between the two from a relationship standpoint.

Haley was later asked to explain what he feels Brown’s current value to a franchise is and if the wide receiver would immediately change the dynamic of another football team and thus immediately make said team a Super Bowl contender if acquired from the Steelers via a trade. In so many words, Haley was asked if he thinks Brown is worth a first-round draft pick.

“I think that’s a hard one,” Haley said. “I think he has a chance to be one of the greatest ever, but that didn’t just happen overnight. The time and effort spent, and again, I got to be there at the right time, AB was really just a special special teams player when I got there, so I kinda got to see it happen through those six years. But six years is a long time to develop that chemistry and get something like that going and there was a lot of hard work put in on everybody’s part to get to that point. And I think he’s obviously worth a ton, but I just think he needs to go to the right place to give him the best chance to succeed, too, and I mean there better be some strong leadership and a strong quarterback.”

That’s also a great quote from Haley on Brown and it’s hard to find much fault in anything he said in his answer. It will indeed likely take a team with strong leadership and a strong quarterback to handle Brown moving forward.

Haley closed out his Thursday interview by first telling a story about Brown from when he first arrived in Pittsburgh after previously coaching two great wide receivers in Larry Fitzgerald And Keyahawn Johnson earlier in his career and how the Steele wide receiver surpassed his own initial expectations. Haley said Brown is highly motivated by what people say he can’t do.

“But, man, this guy is driven inside as much as anybody I’ve ever been around,” Haley said of Brown. “And if you have that, you’ve got a chance to be great. And as a coach and guys you’re dealing with, I mean, what he did for us in Pittsburgh, you know, he and Ben together, I mean, what more can you ask? And I just think he’s a great kid and I love the guy. I talk to him every couple of weeks now.”

There he goes calling AB a kid again.