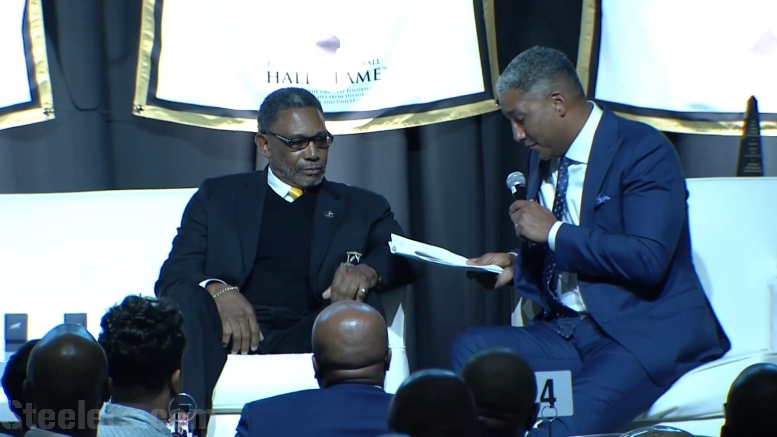 Frank Lewis was the ‘other’ wide receiver for the Pittsburgh Steelers during the first half of their dynasty years. While Pittsburgh’s amazing 1974 draft class included both Hall of Famers Lynn Swann and John Stallworth, Lewis was already on-board as a first-round pick in 1971, though he would be traded to the Buffalo Bills for a tight end that they returned due to a failed physical prior to the 1978 season. They literally gave Lewis away for nothing.

He never had a critical role for the Steelers, his first year as a full-time starter coming in 1974 (and again in 1976), but he did start Super Bowl IX for the team, catching one pass in that game for 12 yards. He did not record a catch for them in the following Super Bowl.

But this year he became a Hall of Famer. Lewis was recently a member of the 10th class of the Black College Football Hall of Fame as a star player at Grambling State in the Southwestern Athletic Conference, where he helped the university win the conference championship in 1968. He scored 42 total touchdowns, both receiving and rushing, during his four years there before becoming a first-round draft pick.

“It’s hard to believe this”, he would say during his induction speech, per the Steelers’ website. “I was thinking are you sure. Did you make the right selection? They told me you earned it. You belong here. I sure appreciate that”.

While he would never find great success in Pittsburgh, his career would actually take an upswing in Buffalo. He would record two 1000-yard seasons with the Bills, earning a Pro Bowl nod in his 11th season in 1981. He never recorded more than 409 receiving yards or more than four touchdowns in any one season with the Steelers.

During his first four seasons with the Bills, Lewis started 60 of 61 games, catching 205 passes for 3709 yards and 19 touchdowns, averaging about 51 catches for 927 yards and five touchdowns per year during that span, which are very acceptable numbers for that time period.

“It makes me tremble, because of all the great athletes that have gone through Grambling, and throughout the black colleges”, he said, for his former head coach “to even mention me in that way and to say that I was one of the better athletes It’s just overwhelming”.

He talked about how that coach, Eddie Robinson, instilled a tireless work ethic in all of his players, emphasizing the need to put work into everything. Wide receivers had to block, “had to know the whole game”.

Lewis didn’t have the sort of career he expected, I’m sure, but he still managed to play 13 seasons in the NFL and has success late in the going. He would finish with 397 receptions for 6724 yards and 40 touchdowns. At the time that he retired, those numbers ranked 40th, 37th, and 68th all-time, so not too shabby.